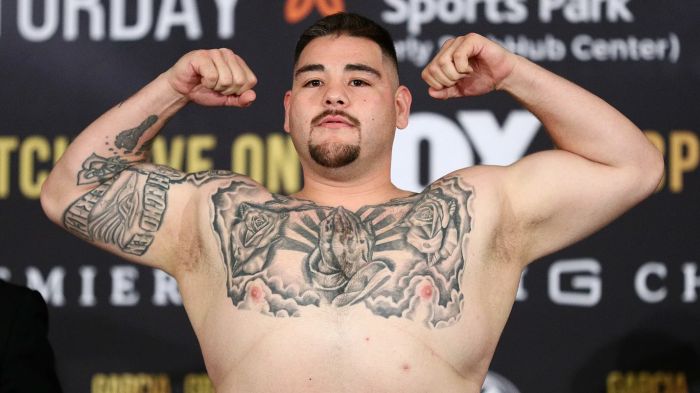 Robles said the split wasn’t surprising as he expected it to happen sooner rather than later.  Shocking for fans, especially based on the words that were exchanged between Ruiz Jr and Robles as they revisited the aftermath of “Clash on The Dunes” December 7 in a post-fight interview.

“I’m sorry Manny, you know, I’m sorry to my dad. I should have listened to them more “

“I think I got too confident of myself and like I said there’s no excuses. He won, I won one and I know for the third one I’m going to be a lot better”.

All props to Andy for taking the blame on himself and not-pointing fingers.

Robles then vowed to stick with his fighter by saying:

“Situations happen in camp and I’m there for him 100 % through good and bad, through thick and thin and I apologize to him too”

Ruiz slayed Joshua in June of last year at Madison Square Garden to claim the IBF, IBO, WBA Super and WBO belts by pulling off one of boxing biggest heavyweight upsets.

The Mexican-American then went on to suffer a huge defeat after being outclassed by Joshua for the WBA, IBF and WBO belts in Saudi Arabia to a stunning upset last summer.

In an interview with ESPN, Robles said about his split with Andy:

“I’ve seen it coming, I’ll be honest with you.

“I’ve seen it coming during camp.

“I saw it coming, Andy was just doing whatever the hell he wanted to do.

So, what could the real reason behind this split be?

Could it be that British promoter Eddie Hearn’s mentioned about an upcoming offer for Andy Ruiz Jr to face Dillian Whyte (27-1, 18 KO’s)?

It would be an understatement to rate Manny Robles as an incapable trainer. We’ve seen how he turned Ruiz Jr into the miracle man he once was deemed as, But may lack the persona to discipline a fighter like him.

The Mexican “Destroyer” needs an authoritative trainer. i.e.; Teddy Atlas, Buddy McGirt, Virgil hunter or Naazim Richardson to name a few; someone who can instill some focus in him and not let him wander off and get all clouded with his wealth, fame and brand new Rolls-Royce.

The former Unified Heavyweight world champion has all but himself to blame for not being ready last summer and of course turning up 25 lbs heavier than he was in New York.

More fighter-trainer splits that we’ve heard of in recent times are: Tyson Fury parting ways with Ben Davison less than 2 months prior to his Wilder rematch; also, well as “GGG” Genady Golovkin ending his tutelage with long-time trainer Abel Sanchez, as well as Dave Allen splitting with with coach Darren Barker.

All the above mentioned moves were driven only by two things in mind: change and dynamic improvement. Andy Ruiz Jr needs plenty of that for sure.

Just like how fighters have different styles and thoughts, so do trainers. Trainers have their own unique approaches in training a fighter, and it clearly seems that promoters might not feel that Manny Robles has what it takes to harness Andy Ruiz Jr for his next move.