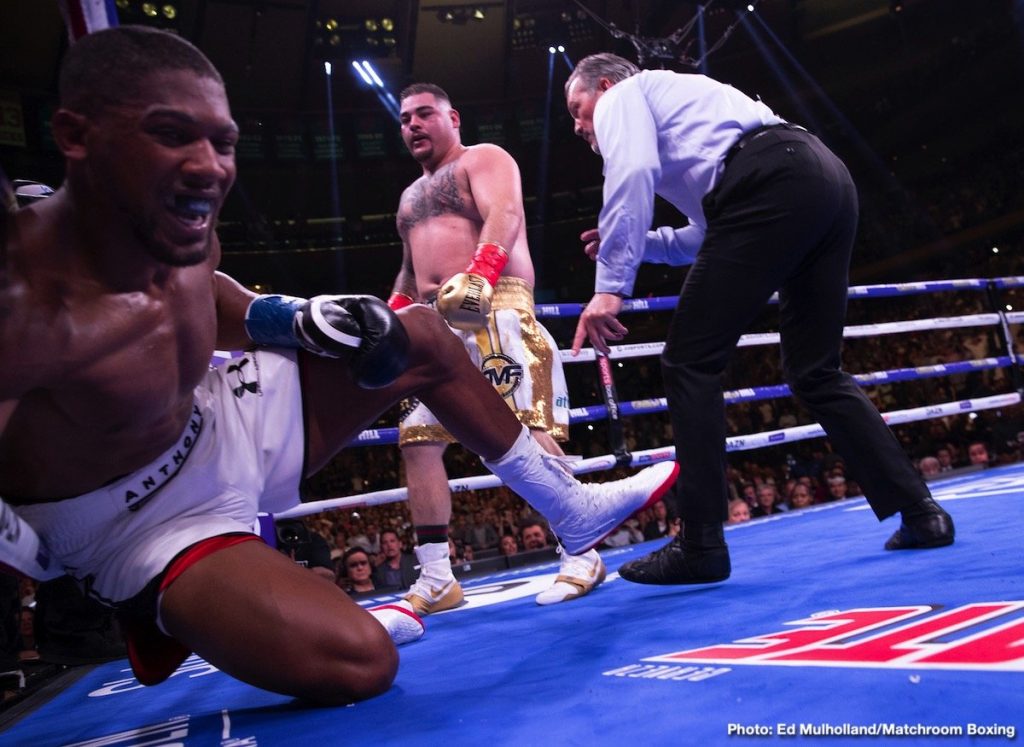 Yet more interesting info from ‘A.J: The Untold Truth.’

We’ve heard Joshua state how he was the victim of a “lucky punch” in his loss to Andy Ruiz, we’ve listened with some alarm as AJ has referred to heavyweight great Lennox Lewis as a “clown,” and Joshua has also made an attempt to clear up that whole, ‘he was KO’d in sparring’ before the June 1 shocker against Ruiz.

Joshua is absolutely adamant he was not KO’d in sparring, by anyone. Added to this, the former WBA/IBF/WBO champ says he did not suffer a panic attack prior to his U.S debut. Of course, certain fans will refuse to believe that Joshua wasn’t flattened in sparring; that SOMETHING wasn’t wrong with the unbeaten fighter when going into the Ruiz defence. But AJ is firm: nothing went wrong in sparring.

“Definitely not,” Joshua said when asked if he was taken out in a sparring session. “I feel like people are more interested in their five minutes of fame. Even in sparring, everyone wants to be famous, rather than a good fighter. Silly stories about knocking me down and all that stuff. You can’t even enjoy your training and work on things without someone trying to make up false allegations, and trying to get five minutes of fame. You bring somone in to your training camo to do them a favour, you’re paying them, nothing like [the KO rumour] in that nature has happened, you beat them up in every round, then they go and do an interview.”

It’s not clear who Joshua is referring to specifically, but Joey Dawejko is the man the rumours said was the fighter who KO’d AJ in sparring. The two certainly worked together, but no way did Dawejko ever claim he knocked Joshua out. In fact quite the opposite, Joey sticking to his moral code of not talking about what happens in sparring. Maybe Joshua was merely generalising, not criticising one fighter in particular.

In any case, it’s all ancient history now and Joshua has to win the rematch with Ruiz. But even if Joshua had been knocked down or even out in sparring, he might still have gone on to beat Ruiz. Plenty of fighters had a rough time in sparring ahead of a big fight but won all the same. Really, there are no excuses for Joshua’s loss to Ruiz – he was simply beaten by the better man on the night.