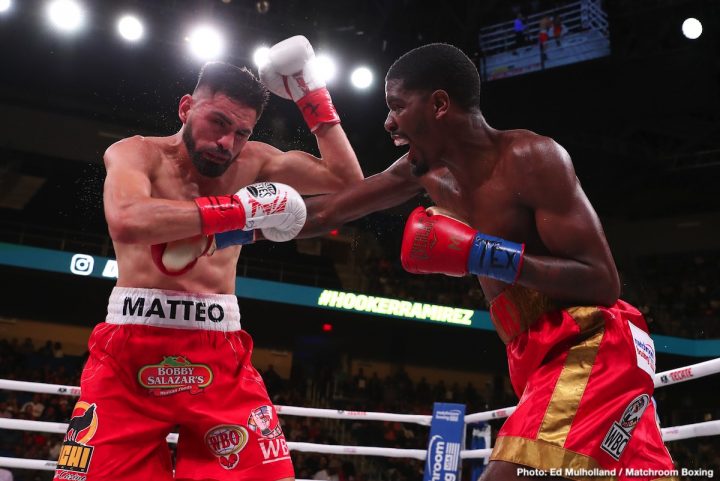 By Chris Williams: The WBC has ordered 140 pound champion Jose Ramirezto start negotiations with his mandatory challenger Viktor Postol. The management for the two camps have until September 20 to make a deal. If not, then a purse bid will be take place on that date. Ramirez (25-0, 17 KOs) also has a mandatory defense due for his recently won World Boxing Organization against Jack Catterall. It’ll be interesting to see which of the two Ramirez faces.

A title defense against Catterall (24-0, 17 KOs) might be the direction Ramirez goes in, because it would give him a chance to make a name in the UK. Catterall is from Britain, and he has a lot of boxing fans over there.

In contrast, the 5’11” doesn’t have much to offer Ramirez. Postol briefly held the WBC title after stopping Lucas Matthysse in the 10th round on October 3, 2015. Matthysse suffered an eye injury that led to the stoppage. Postol lost his WBC title in a 12 round unanimous decision defeat to WBO 140 pound champion Terence Crawford in a unification fight in July 2016. Postol lost badly to Crawford.

Top Rank not saying who Ramirez will face next

Ramirez’s promoters at Top Rank Boxing haven’t said which of the two belts he’ll defend next. He’ll be fighting in November or December against one of them unless Top Rank puts him in with the winner of the Josh Taylor vs. Regis Progais fight. Those two will be fighting in the final of the Premier Boxing Champions 140 pound tourney.

Last month, Ramirez, 27, defeated WBO light welterweight champion Maurice Hooker (26-1-3, 17 KOs) by a sixth round knockout in a unification fight on July 27.  Ramirez took advantage of Hooker’s poor decision making of backing up against the ropes, and covering up like a sparring partner. It was a mistake on Hooker’s part to fight off the ropes, because he was more effective when he was in the center of the ring.

Ramirez looked good, but he was fighting a flawed fighter in Hooker, who fought poorly. In Ramirez’s previous fight against Jose Zepeda, he won a controversial 12 round majority decision last February. Many boxing fans believed that the wrong fighter was given the decision. The way that Ramirez looked against Zepeda, he’ll lose when he eventually faces Regis Prograis and Josh Taylor.

Please allow us to present 30 seconds of pure excitement. #HookerRamirez77311:48 AM – Jul 29, 2019Twitter Ads info and privacy220 people are talking about this

Postol lost recently to Josh Taylor by a 12 round unanimous decision last year in June 2018 in Glasgow, Scotland. Although there’s a lot of disagreement among boxing fans over the scores, they agree that Taylor won clearly. The judges scored the fight as follows: 117-111, 118-110 and 119-108. Since that loss, Postol has rebounded to win his last two fights in beating Mohamed Mimoune (21-3, 2 KOs) and Siar Ozgul (15-4, 3 KOs).

Catterall has been fighting domestic level opposition his entire career.

No deal between Regis Prograis and WBSS

WBA light welterweight champion Regis Prograis (24-0, 20 KOs) and his management are still working with the World Boxing Super Series  in dealing with Regis’ lawsuit against the organizers of the tourney. This month, Prograis filed a lawsuit against Comosa AG, the owner of the tourney. They’re trying to bring Prograis back to the WBSS tournament so that he can face IBF champion Josh Taylor in the final. There’s a lot of boxing fans that are anxious to see those two fighters battle it out to decide the winner of the tourney.READ  Jose Ramirez says he’d knockout Adrien Broner

Ramirez and Top Rank are interested in fighting the winner of the Prograis vs. Taylor fight if it goes down. Their fight was supposed to take place on October 5 in Manchester, England. It can potentially still happen, as long as Prograis is gets what he’s asking for.  If they can work a deal with Comosa AG, then the Prograis-Taylor fight will be rescheduled for October 26, possibly in London, UK.

“We always wanted to resolve this and right now that is what we are attempting to do,” said Prograis’ promoter Lou DiBella to ESPN.com . “Regis doesn’t want to sit out and he wants to win the tournament.”

Prograis will be getting $700,000 for the Taylor fight in the final, and he could earn an additional $1.3 million if he wins tourney. $2 million might not be a huge amount of money for guys like Anthony Joshua, but it’s obviously excellent money for a light welterweight to get.

Winning the WBSS tournament would open the door to Prograis facing WBC/WBO champion Ramirez in a unification. There’s no guarantee that fight will happen though, Top Rank wasn’t in a rush to have Ramirez defend against Prograis last year after he destroyed Julius Indongo by a second round knockout to win the interim World Boxing Council title. Top Rank chief Bob Arum is a shrewd judge of talent, and he’ll know whether it’s safe to match Ramirez against Prograis.

Arum wasn’t eager to make the Ramirez vs. Prograis fight in 2018, and it’s possible that he’ll want no part of making the match in 2019 or 2020. If Prograis destroys Ramirez, then all that time that Top Rank put into building him up will have been wasted. That revenue stream would be cut off potentially. When it comes time for Prograis to ask for a unification fight against Ramirez, we’ll likely see Arum say that the fight needs to marinate more.  Hopefully, eventually lets Ramirez fight Prograis, because it would be a shame if he keeps matching him against guys that are beatable like Hooker.