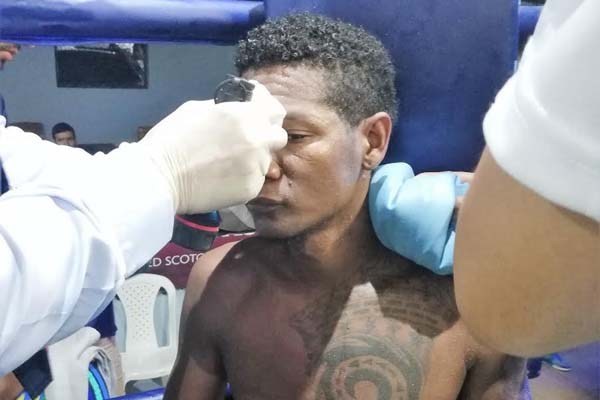 The main event of the boxing card presented by Promociones Murillo at Los Bohios Alegres in Panama resulted exciting and very competitive until 2:41 of round 6. Two of the judges had Barnie Argüelles (12-9, 8 KOs) in front by a point and the other one had Rolando “Tractor” Giono (22-11, 16 KOs) by the same 48-47.

Honoring his nickname, Giono kept moving forward trying to assert powerful punches and looking for a win by KO or a close decision on the fight scheduled to 8 rounds. Suddenly, a headbutt which was immediately ruled intentional by referee Ivan Ballesteros caused a severe cut on Arguelles´ left eyebrow. Dr. Oldemar Soto was called to the ring to try to control the bleeding. He declared Argüelles unable to continue fighting, at the time the referee reiterated to the two commissioners his assessment of an intentional headbutt. Argüelles was declared the winner by DQ.

Undefeated lightweight Ernesto “The Problem” Marin (7-0, 4 KOs) needed only one punch to
finish Jonathan Calderon (0-8) by KO in round 1.