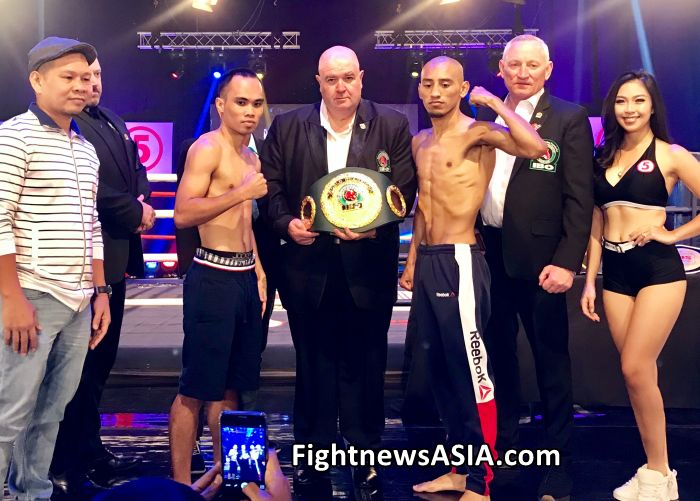 MANILA, Philippines   —   Filipino Carlo “Too Sharp” Peñalosa, 26, and his more experienced Mexican opponent Maximino “Max” Flores, 28, successfully made weight ahead of their collision for the vacant IBO Flyweight World Title.

Their rumble is scheduled to unfold tomorrow Sunday, August 25, at the TV5 Studios in Quezon City, Metro Manila, live on ESPN5 Phiippines; a fierce battle that will produce yet another world champion for the Philippines or for Mexico.

During today’s official IBO weigh in ceremony, the tough and taller Max Flores (24-4-1, 17 KO’s) of Baja California, Mexico came-in at 111 pounds while the less-tested Carlo Peñalosa (14-1, 7 KO’s), made half pound heavier at 111.5 lbs., and who will make his childhood dream of being a world champion a reality?

Carlo Peñalosa’s two uncles, Gerry and Dodie Boy, have been two-division world champions.  Will Carlo succeed as the old men did many years ago?

Or will it be the Mexican warrior Max Flores the one to emerge victorious to get back to the land of Márquez and Morales as a new Mexican world champion?

The fight supervisor for the IBO is Steve Scott of Australia.

Carlo “Too Sharp” Peñalosa vs Maximino “Max” Flores for the vacant IBO Flyweight World Title this coming Sunday August 25 is a production of Gerry Peñalosa’s Gerrypens Promotions with the assistance GerryPens’ Golden Girl Cathrina Gayos, in association with ESPN5 Philippines.

The author Carlos Costa of Panama is a veteran man of boxing living in the Philippines.   Carlos can be reached at carlos512@hotmail.com and whatsapp +639184538152.