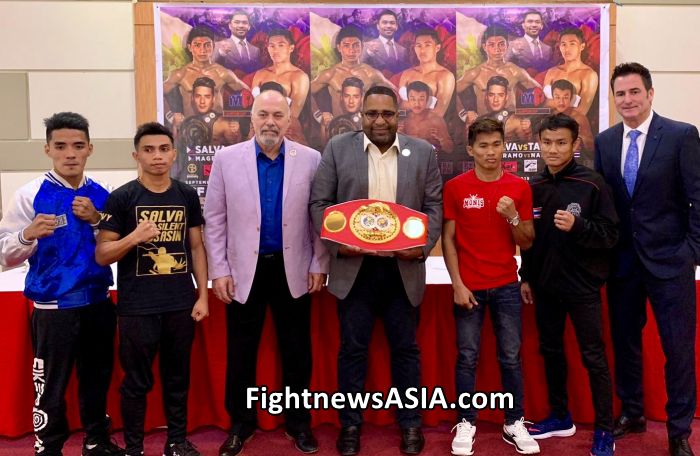 MANILA, Philippines   —   Sean Gibbons, the president of Manny Pacquiao’s MP Promotions, feels that the coming all-Filipino world title battle between young guns Samuel “The Silent Assassin” Salva (17-0, 10 KO’s) and former world-title challenger Pedro Taduran (13-2, 10 KO’s) for the vacant IBF Minimumweight World Title is going to be an all out war, LIVE on channel ABS CBN A+S in the Philippines and in delay telecast on Box Nation in the UK.

For Gibbons  —  a former light heavyweight boxer  —  the rumble is destined to produce yet another world champion for the boxing-loving nation of Philippines, and its all set to unfold this coming Saturday, September 7, at the Navy Gym located inside the heavily-secured Philippines Naval Base, not the usual place for a boxing world title fight.

Attendants to the awesome event need to get clearance by the Filipino Navy to enter their base, a procedure that makes this Saturday boxing experience much more different and cool.

IBF President Daryl Peoples, together with veteran IBF executive Anibal Miramontes, are already in the Philippines for the hot and fast match, another promotion of Filipino icon, champion and senator Manny Pacquiao.

SEAN GIBBONS OF MANY PACQUIAO PROMOTIONS SHARES ON THE EVENT

“For this IBF double-header, one IBF world title and one IBF world title eliminator, I am just so excited,” says Sean Gibbons today Thursday.
“I feel like using that old line from Hall of Famer greatest boxing matchmaker of all time Teddy Brenner “I would want to buy a ticket to watch fight like this!

“These two fighters, Salva and Taduran, will give it all.   I have watched Pedro Taduran on tape and I have watched Samuel Salva in person and I am really excited, I am.

“And the co-feature, can’t be missed.    Because you have world-ranked Giemel Magramo versus the Thai boxer Komgrich Nantapech, handled by Jimmy Chaichotchuang.   Thai boxers are all dangerous warriors, as well as Filipinos.    Plus, their styles just come together so well.

“Two weeks ago, we had a great show world title show here in Manila (Philippines).    Yes, I loved our production of the Johnriel Casimero fight.

“Plus, the main fight makes history here in the Philippines.

“First time in 94 years, since legendary Filipino hall of famer Pancho Villa battled fellow Pinoy Clever Sencio for 15 rounds for the flyweight world title in May of 1925, that two Filipino boxers are collide for a world crown in boxing on Filipino home soil.  Whoever wins, its already history, shares Gibbons who is based in Las Vegas, though a passion for Filipino boxing.

“Filipino Jerwin Ancajas fought world title against fellow Filipino Sultan and Pinoys Nietes and Palicte rumbled, but they did it in the USA.   Salva vs Taduran is different.

Because nobody can say who is going to win as both fighters are young, both bring good fighting skills to the game and is all happening here in the Philippines, and these are the type of fights that Senator Manny Pacquiao want to make possible.   September 7 is going to be a great show.”

Will Magramo download a tough and crushing barrage of punches all over the Thailander, rocking him badly, causing his demise?

Or will the Thai warrior Nantapech be able to dominate the Pinoy this coming Saturday live on TV.    Stakes are really high.     As I told you, try to be there.    Pero if you can’t then, maybe you can watch it on TV.   👍

The show from the Philippines Navy Gym this Saturday, September 7, will air LIVE on ABS CBN S+A at 7 PM here in the Philippines; and on a delay telecast on Box Nation in the UK.

Weigh in will take place tomorrow Friday, September 6, at 2 PM at the Philippine Navy Officers Club in Fort Bonifacio, inside Marines Camp.

“This is just the beginning.   More awesome fights we are going to bring to fans in the Philippines and around the world,” promised Sean Gibbons, Pacquiao’s right hand man at MP Promotions.

The author Carlos Costa is a Panama veteran man of boxing living permanent in the Philippines.   Carlos can be reached at carlos512@hotmail.com and whatsapp/viber 09184538152.