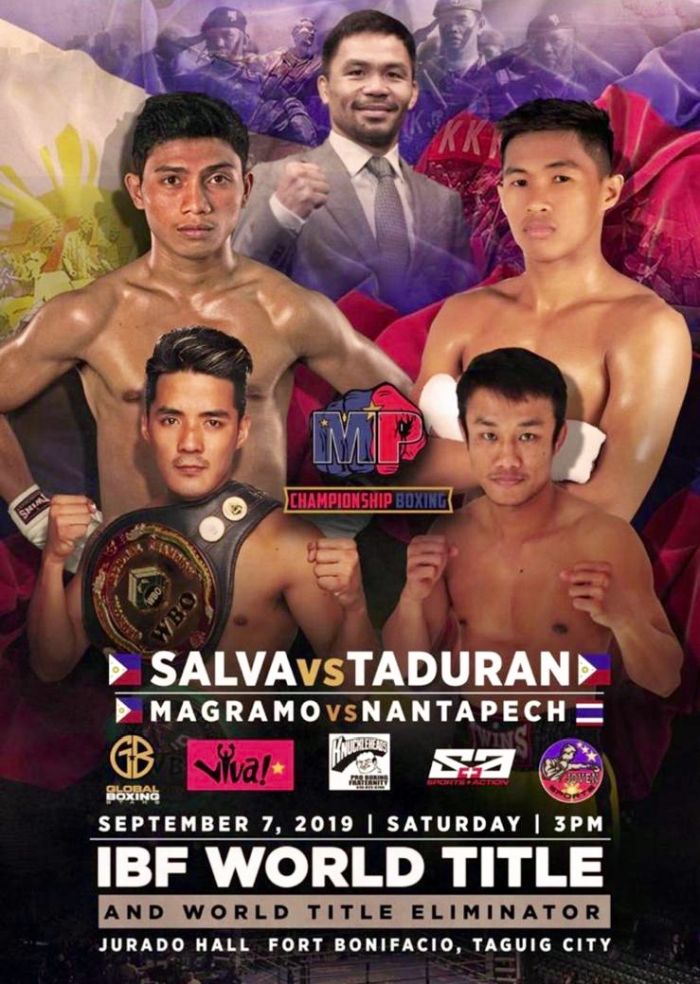 
Manny Pacquiao is not only our greatest boxer and visionary Senator.   He has become a prolific, successful promoter, staging continuous fight cards featuring Filipino talents in world class boxing action.

Just last week the “Pacman” produced the WBO battle of Casimero vs Flores on ABS CBN.    It was a thrilling rumble that ended up with Casimero delivering a massive KO to the visiting Mexican Cesar Ramirez.

Unbeaten “Silent Assassin” Samuel Salva (17-0, 10 KO’s) of Iligan City, fights fellow Pinoy warrior, former world-title challenger Pedro Taduran (13-2, 10 KO’s) of Albay Province in a rumble that will produce yet another world champion for the Philippines, unless the rumble ends up in a draw.

This is Salva’s chance to complete his mission by winning the world title belt that he has dreamed of for years.     Will Salva be able to accomplish the mission, as his handlers wish?

Not an easy mission.    Taduran is not an easy prey.

Born in Libon, Albay Province, Pedro Taduran  —  also 22 year-old  —  is no stranger to fighting for a world title.

In August of last year, the southpaw Pedro Taduran battled formidable WBC Minimumweight World Champion Wanheng Menayothin (53-0, 18 KO’s) over twelve demanding rounds in the far away Province of Nakhon Sawan in the Kingdom of Thailand.

I traveled there to Nakhon Sawan, Thailand, to attend Taduran’s fight.

And I can say from my eyes and my mind that the Filipino Taduran fought good.

Yes, the Thai world champion Menayothin won the combat.    Yes, the Thai was much more experienced and really effective, and outmaneuver Pedro in that incredibly hot and sunny Wednesday afternoon in the that Province in northern Thailand.

The Thailander world champion could not knock Taduran out, even though he tried.      Pedro fought well.   No regrets.

That is why in my mind, the Samuel Salva vs Pedro Taduran clash for the IBF 105-pound world title is a really excellent match up.

For me, it is very balanced.   I see it 50-50.     Both young warriors have proven to fans that they owe boxing skills and know how fight tough foes an important stage.

Fans are in for a cool ride.

And very importantly, Philippines will claim yet another world title in boxing.      You may try to be there at the Philippine Navy Gym this Saturday night.

Who will emerge victorious?

Will Magramo download tough a crushing barrage of punches all over the Thailander, rocking him badly, causing his demise?

Or will the Thai warrior Nantapech be able to dominate the Pinoy this coming Saturday live on TV.    Stakes are really high.     As I told you, try to be there.    Pero if you can’t then, maybe you can watch it on TV.   👍

According to MP Promotions President Sean Gibbons, the show this Saturday, September 7, will air LIVE on ABS CBN S+A.

.
The author Carlos Costa is a Panama veteran man of boxing living permanent in the Philippines.   Carlos can be reached at carlos512@hotmail.com and whatsapp/viber 09184538152