Rau’shee Warren had to claw for it all the way, but he finally picked up that big win that has eluded him in three Olympics and his first world title fight, beating Juan Carlos Payano by majority decision to win the WBA bantamweight title.

How you scored this fight really depends on what you liked more, perhaps. Warren was more accurate, landing 160 of 514 punches, a 31% connect rate, with Payano much busier, landing 162 of 882 punches, but connecting at just an 18% clip.

There were rounds mixed in where Warren looked like he’d lost the script a bit, but he bounced back consistently, too, and was able to land some crisp counter shots that caught the eye much more than the majority of Payano’s work.

For Warren, it was an emotional win. When Ray Flores announced, “and the new,” Payano collapsed to the canvas, where longtime friend and associate Adrien Broner smothered him with a hug. 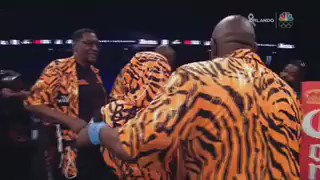 It’s a big win a long time coming for the 29-year-old Warren, who lost in his first fights at the 2004, 2008, and 2012 Olympics, and dropped a close split decision last August to Payano in his first world title crack as a professional.

Warren said after the fight that he would consider giving Payano a rematch, as Payano gave him, which would mean a third fight between the two.