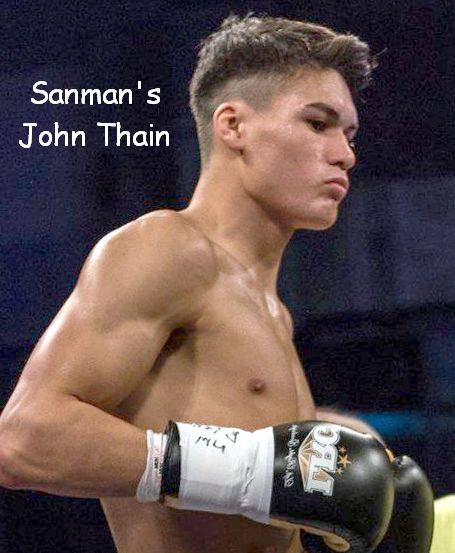 Scouting for new boxing talents with unlimited potentials is one of every boxing manager’s job. Sanman CEO Jim Claude Manangquil has a new golden discovery. He is John Thain (W17 L4 D0).

John is half Filipino and Scottish. His mother Rizalina is from Mindanao and grew up in Cebu. He as 60 amateur bouts before turning pro and have represented Scotland in international competitions.

John’s greatest influences in boxing are Muhammad Ali, Sugar Ray Leonard, and of course our very own Manny Pacquiao. He says he was inspired to go into boxing after watching Rocky. “I was a fan first. I have watched five Rocky sequels before starting to box.”

As seen in his record, Thain has an amateurish technical style inside the ring. “I am known for my jab. I make points from it.“

He is very proud of his Filipino roots and cannot wait to fight in front of his fellow Filipinos. He was still a child when he last came to the Philippines and working with Sanman is an opportunity for him to rediscover his Filipino heritage.

“I can’t wait to fight in the Philippines. I have always fought in the amateur way. Get points and win. Now I want to be more of a Filipino warrior kind of boxer.

Filipinos are known as relentless warriors. We come forward and mix things up. I hope to learn that from my coaches at Sanman. I want to make my fellow Filipinos proud of me. I want to show them what I got”, Thain stated.

Sanman CEO Jim Claude Manangquil is just as excited on his new protégé.

“John Thain is a Filipino with Caucasian looks just like the Younghusband brothers of soccer. Here comes a Filipino-Scottish who boxes and fights.

“And Philippines is a boxing nation. With the proper training and exposure, John will be a big thing here and internationally. He’s got the looks, the size and the talent of a boxing star. We will do our best to make him one. We can’t wait to work with him”, Manangquil said.