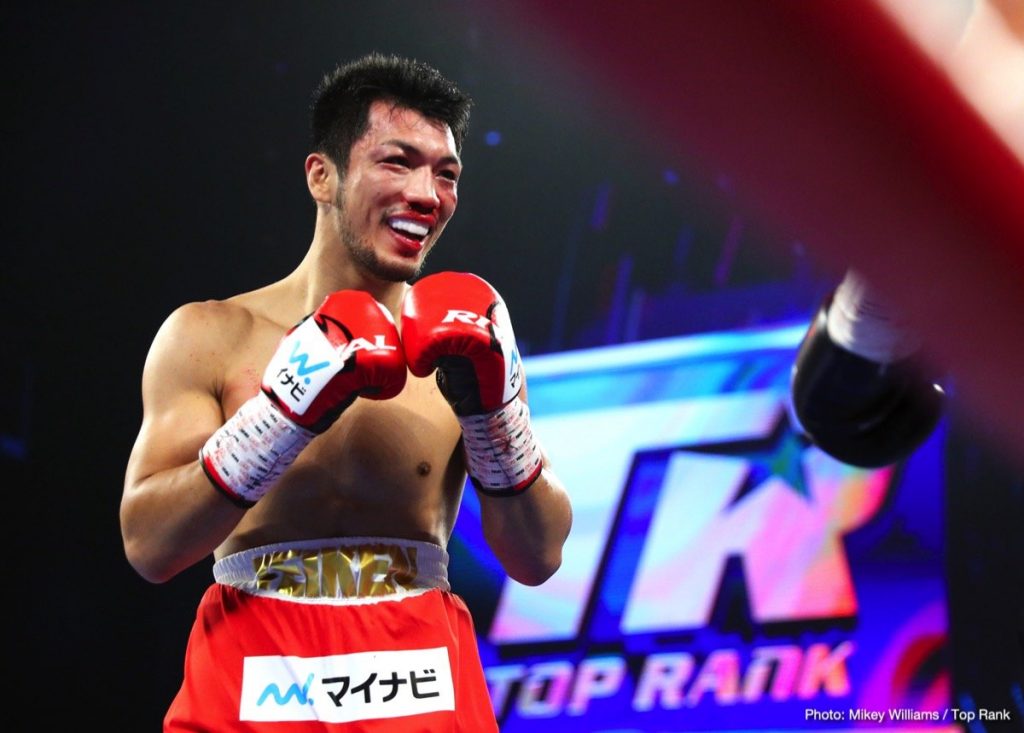 By Barry Holbrook: WBA ‘regular’ middleweight champion Ryota Murata (15-2, 12 KOs) will be defending his title potentially against former WBO welterweight champion Jeff Horn (19-1-1, 13 KOs) in December. It’s an intruging fight to hardcore boxing fans, because it gives Horn a shot to show whether Murata a paper champion or not.

Horn will need to win his next fight against Michael Zerafa on August 31 before he can challenge Murata. That’s the condition, but he’ll likely win that bout.

Murata’s promoter Bob Arum of Top Rank wants Murata and Horn to fight in December, according to @SteveESPNKim. It’s an obvious match-up for Top Rank to make, because they promote both fighters. Both guys are flawed, and very beatable. Murata is largely viewed by boxing fans as a paper champion. In other words, the weakest link among the middleweight champions, and he rarely gets mentioned by fans.

The problem that Murata has is the WBA has two world champions at 160. There’s Murata, who holds the WBA ‘regular’ strap, and WBA Super World champion Canelo Alvarez. Murata’s ‘regular’ title is the lower level title to Canelo’s ‘Super World’ strap.

2012 Olympic gold medalist Murata, 33, recently won back his World Boxing Association 160 pound title in defeating Brant by a second round knockout on July 12 in Osaka, Japan. Murata used his size and power advantage to steamroll the smaller weaker Brant.

Last October, Brant had dominated Murata in beating him by a one-sided 12 round unanimous decision to dethrone him as the WBA champion. In that fight, Brant threw over 1,000 punches, and he gave Murata a beating. That second career defeat for Murata as a pro. He lost to Hassan N’Dam by a 12 round split decision in May 2015. Murata later avenged the defeat in stopping N’Dam in the seventh round five months later in October 2017. Murata deserved the loss to N’Dam in the first fight, even though his fan base cried that he was robbed. N’Dam out-boxed Murata, which isn’t hard to do, because slow and loads up on everything.

Arum would be pleased if Gennady Golovkin or Saul Canelo Alvarez chose to fight Murata, but neither of them done so yet. Golovkin was interested in fighting Murata last year, but he was tied up with Canelo Alvarez. Murata losing his WBA title recently to Brant closed the door on a GGG fight.

Jeff Horn reinventing himself at 160

After losing his WBO 147 pound title to Terence Crawford last June, Horn, 31, moved up middleweight and defeated Anthony Mundine by a 1st round knockout last November. Horn’s job was made easier by the fact that Mundine (48-9, 28 KOs) was 44-years-old, and nowhere near the fighter he was in his late 20s. Horn had always been huge for a welterweight, and he looked  like a junior middleweight when he would rehydrate for his fights. In July 2017, Horn used his size advantage to rough up Manny Pacquiao and beat him by a questionable 12 round decision in Brisbane, Australia.

Pacquiao wasn’t happy about the judges scored the fight, as well the roughhouse tactics that Horn got away with. The referee should have taken points away from Horn multiple times for the way he roughed up Pacquiao. After winning the WBO belt, Horn successfully defended it once in beating Gary Corcoran by an 11th round knockout in December 2017. Last summer, Horn was stopped in the 9th round by Crawford in Las Vegas, Nevada. Unlike Pacquiao, Crawford didn’t have to travel to Brisbane to face Horn.