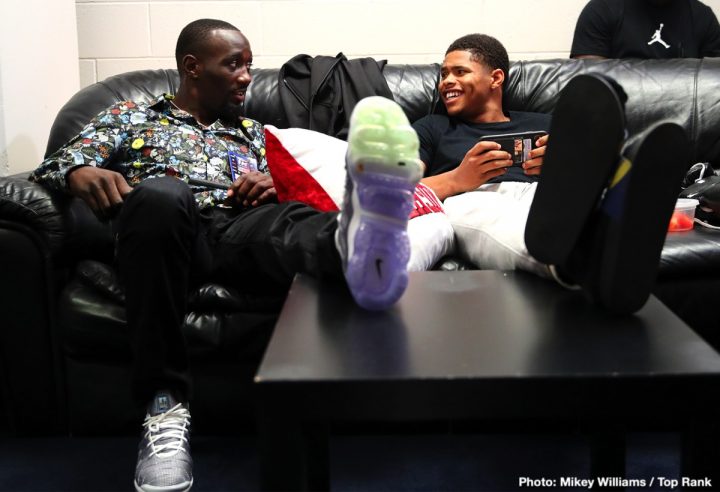 Has Terence Crawford done enough to be considered as a future Hall Of Famer? Crawford, a three weight world champion – 135, 140 and 147, is if course far from done yet; in fact, it could be argued that the reigning WBO welterweight champ is at or around his absolute peak at age 31 (32 next month). There are sure to be more dazzling and impressive performances to come from the Nebraskan hero, but does “Bud” need a super-solid, defining fight to secure his spot in the HOF?

Wins over the likes of Ricky Burns, Yuriorkis Gamboa (this thriller of a shoot-out arguably Crawford’s best win to date), Julius Indongo, Ray Beltran, Viktor Postol, Jeff Horn, Jose Benavidez Jr and, last time out, in an unsatisfactory affair, Amir Khan are good, sure, but does Crawford need more to cement his HOF creds?

The one man we all really want to see Crawford fight is of course rival 147 champ, the likewise unbeaten Errol Spence. This match-up seems such a natural and obvious one to make, and the winner would leave no real doubt about his HOF credentials. Both fighters seem to really want the fight, yet so far, for whatever reason or reasons, the biggest fight that can be made at welterweight today has tantalised fight fans yet remained elusive.READ  Former Foe Tim Bradley Says If Manny Pacquiao Can Beat Errol Spence He Is Easily Top-Three Greatest Ever

Crawford, speaking on the latest episode of the Joe Rogan podcast, says he is going into The Hall of Fame with or without Spence. Crawford went even further, stating how Spence, the current IBF welterweight boss, needs him, not the other way around. Moreover, Crawford told Rogan that there are, in his opinion, fighters currently enshrined in The Hall who achieved nowhere near what he has done so far in his 35-fight pro career – 35-0(26).

So can Crawford go into the HOF without facing and defeating Spence, the most obvious threat to him? Could Crawford, such a natural and proud competitor, really feel content at the end of his career having not squared off with “The Truth?”

Bottom line: these two men NEED to face one another, they need to fight and see who really is the superior boxer. Possibly the biggest 147 unification showdown since the epic Sugar Ray Leonard Vs.Thomas Hearns battle from back in 1981, Crawford-Spence cannot fall by the wayside. Deep down, no matter what they may say, both Crawford and Spence know this.READ  Spence-Porter: Robert Guerrero added to undercard on Sept.28

Both unbeaten champions also know there will be one BIG, glaring ‘what if’ attached to both of their names if they have exited the sport not having fought one another. Whether they have been honoured with a plaque hanging on the Hall of Fame wall or not.

Next up for Crawford, possibly, will be the guy with the almost unpronounceable name but the talent to more than make up for it, maybe – Egidijus Kavaliauskas, perhaps on December 14th. Can we really get overly excited about this potential fight? Is time running out on the can’t-miss classic that is Crawford Vs. Spence?