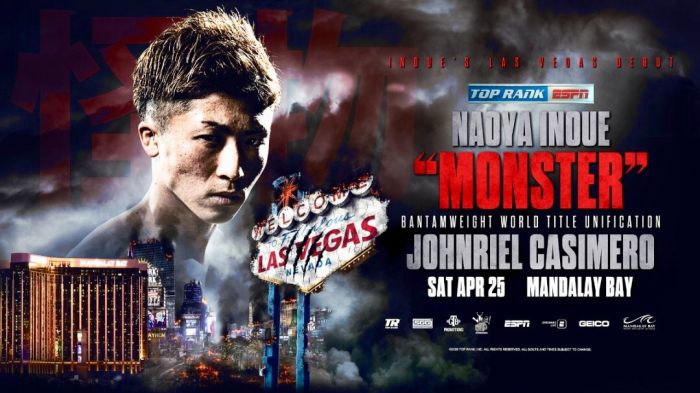 Japans boxing marvel Naoya ‘MONSTER’ Inoue (19-0,16 KO) is set to make a return to American soil for a Bantamweight unification in his Las Vegas debut under a co-promotional term with Top Rank INC on Saturday, April 25 at the Mandalay Bay Events Center.

The 2 men who simultaneously made their last ring appearance in November last year,will fight to unify three of the four major world titles at 118 Lbs.

Inoue comes off a split decision win over Fil-Am superstar Nonito Donaire at the world boxing super series in November 2019 despite a broken orbital bone— Upon which the 26-year-old Inoue plummeted himself to reign the mythical Pound for Pound rankings, Eyeing to become one of the best fighters in the world.

When asked on how he felt of this upcoming bout, this is what Inoue had to say:

“It is a tremendous honor and a dream come true to headline a card in Las Vegas against a great fighter like Casimero,” Inoue said. “It is my goal to be the undisputed bantamweight king, and I am coming to America to put on a great fight for the fans.”

WBO Bantamweight world champion – John Riel Casimero from Ormoc City, Philippines is no stranger in the Bantamweight division either. Having globe-trotted to win world titles across Mexico, England, China and Panama.

The Pinoy proves to be a fierce contender for the Japanese slayer. Casimero stopped Zolani Tete of South Africa via a third-round TKO last November in Birmingham England. At 29 years of age, Casimero appears to be in his best shape having won his last 5 appearances by stoppages.

On accounting this fight as his dream come true, Casimero said:

“This is my dream fight. I have traveled the world and fought in 10 countries. I’ve won world titles at 108, 112 and 118 pounds,” Casimero said. “But ever since I saw my hero and fellow countryman, Senator Manny Pacquiao, fight in Las Vegas, that has been my dream.

“To everyone who thinks I am the underdog on April 25, I will shock the world and show the fans who the real ‘Monster’ is in the ring.”

Premised on whatever unfolds the night of April 25th, the victor will only have one other hurdle to face in order to unify the Bantamweight division. Potentially facing current WBC Bantamweight world champion Nordine Oubaali or Nonito Donaire.

Oubaali and Donaire are confirmed to meet in the ring to a date that’s yet to be finalized.

The card will also feature, Joshua Greer Jr and Jason Maloney in the undercards. Catch the action live on ESPN+.

Anil Kumar is a boxing Journalist for FightnewsAsia and a boxing ring announcer/commentator/analyst.