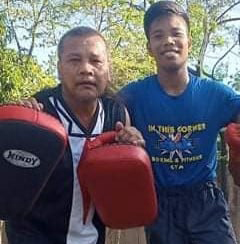 Landero to finally go to Jakarta

They were supposed to leave last March 26 but needed a visa due to pandemic situation.

They were supposed to fly to Indonesia to fight Tibo “Ilduce” Monabesa (20W-1L-2D, 8KOs) of Indonesia on April 10 for the vacant World Boxing Council International Lightweight title at the Balai Sarbini Convention Hall in Jakarta.

The visa problem was fixed by Indonesian promoter Armin Tan