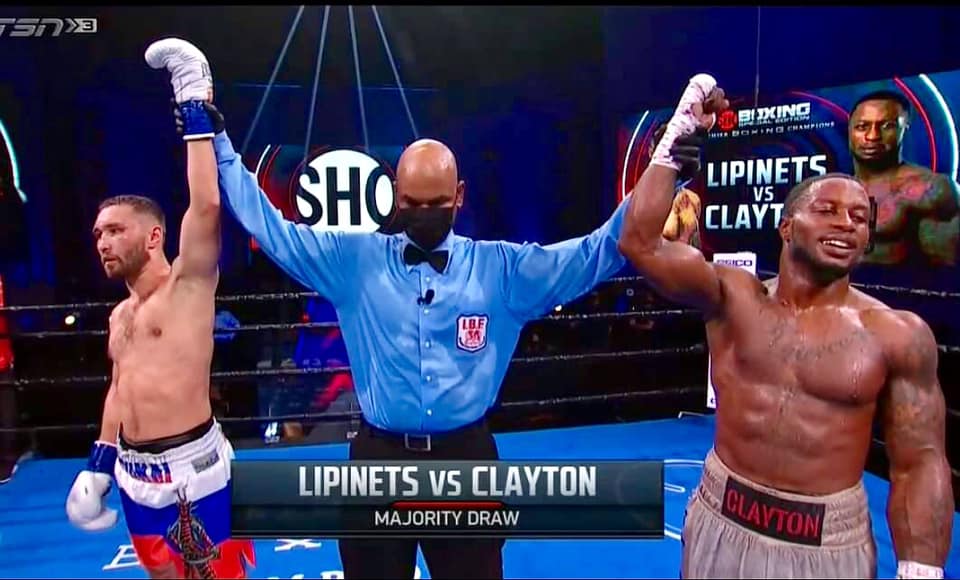 The tough and more aggressive Kazhak seem to have dominated early on in the rumble, but the Canadian closed better with good boxing, forcing the draw.

Some fans on social media think that Clayton, 33, should have deserved the win by a small margin, however, the official score is a draw, and a rematch for 2021 is a possibility.

During Showtime’s post-fight interview, Lipinets said that the Canadian Clayton was a stronger and better fighter than he thought, but feels that he won the clash by a small margin.

The Kazakh fighter also shared that his coach Joe Goosen has made him a stronger and better warrior, forging him able to punch harder while dishing out a larger volume of punches.

Lipinets also added that he would like a rematch with Clayton for the IBF interim title.

Meanwhile, Clayton in his first fight in the USA proved to be effective, competitive and tought. He commented afterwards that he thinks that deserved the victory due his “smart fight,” but mentioned that he accepts the judges’ draw verdict.

Clayton added that he has shown to the world possesses a fighting quality, proving that he is a good welterweight at a high level of competition.

Clayton expressed that he thinks that fans should now give him more credit, appreciating more his boxing skills; and if a rematch is offered, he would collide with Lipinets again. Maybe fans will see that in 2021.

Next weekend on Showtime is the hot 2-division world-title war between Gervonta Davis vs Leo Santa Cruz live from San Antonio, Texas. May the Best Man Win.

The author boxing writer Carlos Costa lives in Cebu and can be reached at carlos512@hotmail.com and WhatsApp +639184538152