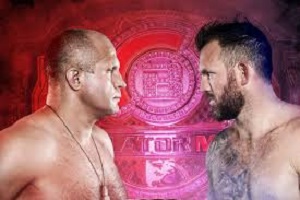 Bellator 214 is scheduled to go down this Saturday night, January 26, and will be capped off with the finale of the promotion’s heavyweight Grand Prix. MMA great Fedor Emelianenko is scheduled to face the promotion’s light heavyweight champion, Ryan Bader, with the winner being crowned Bellator’s heavyweight king. That matchup will be covered in its own separate post. This writeup will cover the other main card bouts, including the sizzling co-main event between surging featherweight contender Henry Corrales and lethal 4-1 prospect Aaron Pico.

Before that, former WWE champion Jack Swagger is set to crossover and make his professional MMA debut, as he takes on the 1-1 heavyweight JW Kiser. Super-talented bantamweights are also expected to collide at Bellator 214 when the James Gallagher slaying Ricky Bandejas takes on former four-division KOTC champion Juan Archuleta. Bellator’s website has listed the 5-6 Brandon McMahan vs. the 7-5 Adel El-Tamini as the main card opener. We’ll see if that remains the case when multiple-time IBJJF no-gi Jiu-Jitsu champion AJ Agazarm is making his professional MMA debut on the prelims.

Henry Corrales endured a baptism by fire in his first-three Bellator bouts. He came up short to Daniel Straus, Emmanuel Sanchez, and Patricio Freire, in that order, but has been on fire ever since. The 16-3 Corrales has reeled off four-straight wins, two respective decisions over grappling aces Noad Lahat and Georgi Karakhanyan, and then two respective finishes over Cody Bollinger and Andy Main.

Corrales is known to march forward behind his strikes and really loves to throw his punches in combinations. He does a sound job of mixing in his leg kicks and can be lethal with punches to both the body or the head. The MMA Lab fighter is also known for his toughness. Emmanuel Sanchez knocked out his front teeth early in the second round of their bout, but Corrales fought on and the bout went to a split decision. With a win over lethal prospect Aaron Pico, Corrales would have five-straight victories in the featherweight division, which should place him right at the top of title contention.

Aaron Pico had a ton of hype behind him going into his professional debut in the lightweight division. Pico came up short to Zach Freeman, getting submitted in the opening round. Since then, Pico has dropped down to featherweight and has been lights out. Four-straight opponents have been obliterated in the opening round, thanks to the impeccable punching power of the talented prospect.

Pico has an extremely educated left hook. Like his opponent Corrales, Pico can stop you to the body or to the head. The difference between the two being that Corrales accumulates his volume to find a late finish, and Pico ends the show with one-punch in the opening round. There are still many questions as to what Pico might look like in rounds two and beyond. That makes the power of Pico vs. the toughness of Corrales an interesting dynamic. If Corrales can weather the early storm, could he drag Pico into deep waters where he’s never been? If Pico can blast right through the Corrales, then he should absolutely be fast tracked to a title shot.

Former WWE champion Jack Swagger is out to make his professional MMA debut. Professional wrestling is “fake,” but Swagger was actually an All-American collegiate wrestler, and even set the University of Oklahoma record for most pins in a single season with 30. How much of his collegiate experience will play a factor here? His opponent, JW Kiser, is 1-1 with both pro bouts ending in the first round. Kiser did have a lengthy 11-9 amateur record, so at least he will have some MMA experience on his side. Hey, it’s heavyweight and anything can happen, especially with such young records.

Ricky Bandejas made his Bellator in spectacular fashion. Despite James Gallagher being extremely disrespectful, Bandejas blocked out the head games and got his sweet revenge. With shades of the Heartbreak Kid Shawn Michaels, Bandejas dropped Gallagher by cracking him right in the mouth with some ‘Sweet Chin Music.’ Bandejas followed up with some aggressive ground and pound which put Gallagher out cold. Under the tutelage of UFC veteran Nick Catone, the 11-1 Bandejas is looking to make a name for himself under the Bellator banner.

Juan Archuleta won all of the titles for KOTC. He legit held the belts from flyweight up to lightweight, which is an insane accomplish. Stepping up onto the big stage, Archuleta reeled off three-straight wins at featherweight, including a third round finish of UFC veteran Robbie Peralta. Archuleta is known for pushing a crazy pace and coming forward. He likes to grind out his opponents against the fence and sniff out the takedowns when they present themselves. At 21-1, is Archuleta the real deal and ready to make a run at the bantamweight title?

Bellator’s website has listed the 5-6 Brandon McMahan vs. the 7-5 Adel El-Tamini as the main card opener. We’ll see if that remains the case when multiple-time IBJJF no-gi Jiu-Jitsu champion AJ Agazarm is making his professional MMA debut on the prelims.

For an in-depth breakdown of each Bellator 214 main card fight, check out The MMA Vivisectionwith Bloody Elbow’s own Zane Simon, Vic Rodriguez, and Eddie Mercado. Stay glued to Bloody Elbowfor all of your event coverage including play-by-play, results, highlights, and more!