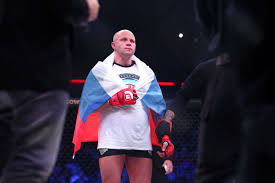 We are just one day away from Bellator MMA’s first event of 2019, which features the heavyweight grand prix final/championship bout between the legendary Fedor Emelianenko and current Bellator LHW king Ryan Bader. With the card taking place in California, we do have some payout info courtesy of the California State Athletic Commission (CSAC).

Per MMA Fighting, Fedor is the top guy in terms of fighter salaries at $300,000, whereas Bader is next up at $150,000. For Bader, this is the same official purse listed as his quarterfinal KO win over King Mo last year. This is the first time that Emelianenko has had a reported payout in his Bellator career. Your next highest purse belongs to super prospect Aaron Pico, who’s received a bump from $40,000 from his September 2018 win vs. Leandro Higo to $45,000 for his co-main event vs. Henry Corrales. If Pico wins, that purse gets doubled to $90,000.

Here are the full main card purses, of course noting that these are the reported payouts and not necessarily what the fighters will make. These do not include discretionary bonuses, contract clauses, sponsorship money, etc.