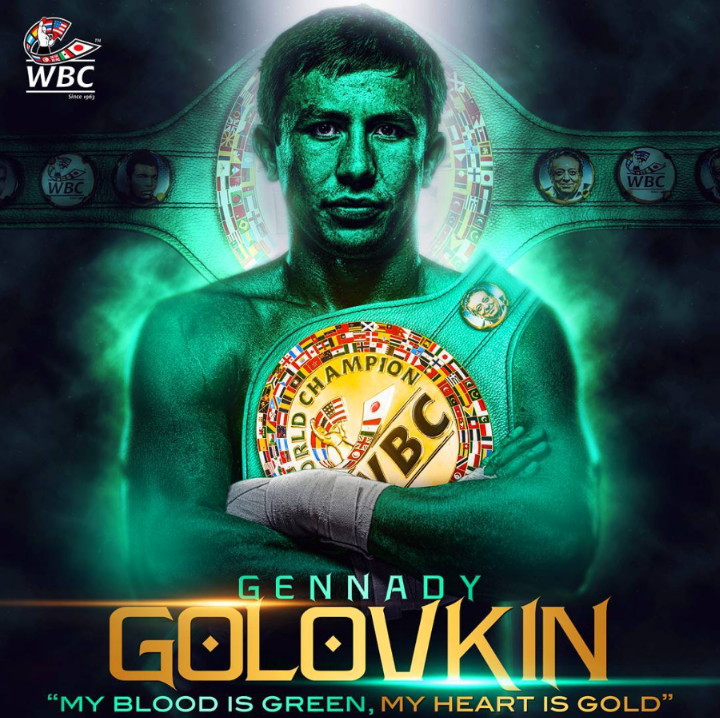 By Jim Dower: Oscar De La Hoya has pulled the verbal $15 million flat fee offer that he had previously made to Gennady Golovkin for a fight against his fighter Saul “Canelo” Alvarez in September. This comes after the reports of Golovkin’s low pay-per-view numbers on HBO for his fight last Saturday night against Daniel Jacobs. The new offer that De La Hoya will be giving to Golovkin will be based on pay-per-view sales for the Canelo fight rather than a guaranteed purse.

It’s quite possible that the percentage split that Golovkin is offered for the Canelo fight won’t be as good a deal as the original $15 million guaranteed offer. The reason for that would be due to Golovkin’s PPV numbers for the Jacobs fight. That was not a smart move for Golovkin’s promoter Tom Loeffler to agree to fight Jacobs on HBO PPV. It was the wrong time for Golovkin to fight HBO or to fight someone like Jacobs, who fought defensively most of the fight. Golovkin should have fought Jacobs on regular HBO, because the fight would have likely brought in huge ratings, and he could have used the ratings to help his chances of getting a better deal in a fight against Canelo.

De La Hoya isn’t going to take a big risk by giving Golovkin the guaranteed purse if it’s not certain if the Canelo-Golovkin fight can be as big as boxing fans originally thought it would be. The new deal “to make it fair,” said De La Hoya to the latimes.com. A percentage split of the PPV and gate revenue will go a long ways towards minimizing risk for De La Hoya. Coming up with the right split to make Golovkin and Canelo both happy will be the tricky part. Canelo needs to approve of the percentage split for the fight. If he decides that De La Hoya is being too generous to Golovkin, then it complicates matters depending on how anxious Golovkin and his promoter Tom Loeffler are in getting the fight. They’re not in the best position to bargain right now after the way Golovkin performed against Jacobs.

The PPV numbers for the Golovkin-Jacobs fight are said to be in the 150,000 range. Even if they’re as high as 200,000, those are not large enough PPV numbers to give Golovkin room to negotiate for a large percentage split. The thing we don’t know is how well Canelo would do in terms of PPV numbers on HBO if he were to fight Daniel Jacobs. We do know that Canelo’s last fight against Liam Smith brought in only 300,000 PPV buys. That’s not a lot. But in his two fights before that, Canelo brought in 600,000 in fighting Amir Khan and 900,000 in a fight against Miguel Cotto.

“It obviously shows you there’s only one pay-per-view guy and that’s Canelo,” De La Hoya said to the latimes.com about the Golovkin-Jacobs PPV numbers on HBO. “People talk about Golovkin being this big superstar. Why is he selling only between 100,000 and 200,000 homes? He’s no Canelo, that’s for sure.”

Golovkin was up against it in fighting Jacobs last Saturday night on HBO PPV. There were other sports going on at the same time. There was a lot of competition for eyeballs during that evening. It might have been better if Golovkin’s promoter Tom Loeffler and the management for Jacobs had planned the fight on a date where there was nothing going in the evening hours.

If Canelo and De La Hoya both want the fight against Golovkin, then they’re going to need to give him a fair split. If Canelo was 5 X more than Golovkin in terms of a percentage split, then it might not work out. Canelo isn’t bringing in that many more buys nowadays. That could be that the boxing public is starting to lose interest in his fights due to them being mismatches against fighters that weren’t expected to be competitive with him.

Canelo’s last two fights on PPV were against Liam Smith and Amir Khan. That was probably a big mistake on Canelo and Golden Boy’s part to make those two fights on PPV rather than on regular HBO. Manny Pacquiao and Floyd Mayweather Jr’s PPV numbers dropped off after their big fight, and you can argue the main reason for that is the poor match-making done by both of them. They stopped facing high caliber opposition that the boxing public wanted to see. At this point, it’s unclear whether Pacquiao can ever get his PPV numbers back once again.

“We have to work with each other. It all depends on the pay-per-view and that’s the risk we all have to take,” said De La Hoya in talking about Golovkin’s promoter Tom Loeffler.

Just how many extra PPV buys Canelo gets in fighting on those holidays would be interesting to know? If Canelo fought the guys he’s been facing lately on a non-Mexican holiday, he might not do that well. But the fact that Canelo’s latest fight against Liam Smith brought in only 300,000 PPV buys last September, it’s not a good sign. That fight took place on the Mexican Independence Day holiday weekend.