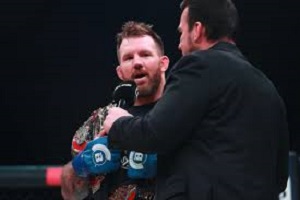 Ryan Bader’s coach, Jair Lourenco, believes the Bellator two-weight world champion has a very realistic chance of finishing Daniel Cormier if they two are to meet in a fight in the future.

Although the pair traded barbs back in 2015 and were scheduled to fight each other in the UFC that year, Bader stated “he’s over that” beef, but would still be keen for a fight with Cormier. His coach Lourenco told MMA Fighting the same.

“I believe that a five-round fight would be a great scenario for us. Bader does great in five-round fights, but they both have heavy hands. “Lourenco said.” I wouldn’t be surprised if it was a war, but I believe Bader has a great chance of finishing him inside five rounds.”

Bader has not lost a fight since signing for Bellator in June 2017, picking up stoppage victories against the likes of Muhammed Lawal and Linton Vassell during his current five-fight stint for the promotion.

“Cormier is a great guy, much respect to him, but I see a good match-up for Bader. Cormier is an excellent wrestler with a good game on short range, the same game Bader does well. Cormier did more in pure wrestling, but Bader’s wrestling is great for MMA.”