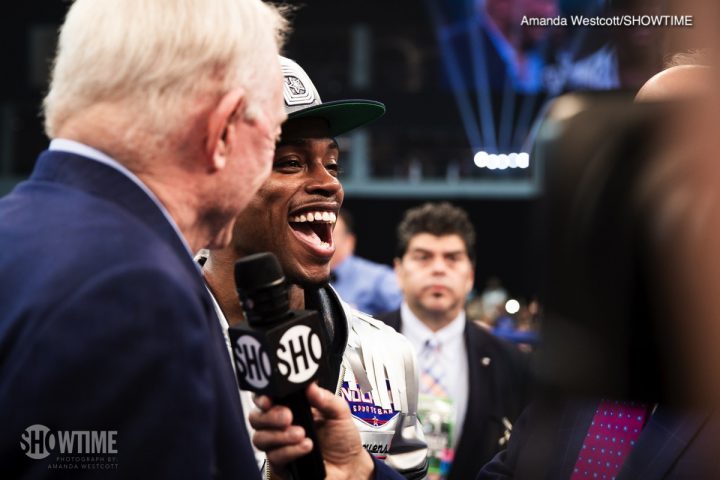 AT&T Stadium seats 100,000. If Spence vs. Garcia sellout the stadium it would be a huge accomplishment. The highly popular Saul Canelo Alvarez’s fight against former World Boxing Organization 154 lb champion Liam Smith solid 51,000 tickets in their September 2016 fight. Canelo single handedly brought in a huge crowd. Spence vs. Garcia is a much bigger fight than Canelo-Smith, so it could sellout entirely. It’s a risk in putting Spence vs. Garcia in a huge 100,000 seat stadium like the AT&T Stadium. What happens if only 20,000 fans show up for the fight? You’d like to have seen Spence prove that he could sellout a 50,000 seat stadium before he moved up to a big stadium like the AT&T Stadium.

This will be the second consecutive fight for Spence at a Jerry Jones venue. Jones owns the AT&T Stadium that Spence and Garcia will be fighting at on Showtime on March 16. In Spence’s previous fight, he wiped out his mandatory challenger Carlos Ocampo (23-1, 14 KOs) by a 1st round knockout last summer on June 16 at The Star in Frisco, Texas. The Spence vs. Ocampo was a sellout. It didn’t matter that Spence wasn’t fighting a high profile opponent. The boxing fans from around the area scooped up the tickets fast to see Spence an and Ocampo battle it out. Given the huge interest in the Spence-Ocampo fight, there’s expected to be a huge crowd for the Spence vs. Garcia fight on March 16.

Garcia, 30, and Spence, 28, still need to sign the contract for the fight, but it’s looking good right now. Spence and Garcia are both interested in the fight, and that’s half the battle.

Spence was born and raised in Texas, which makes it the ideal place to stage his fight with Mikey Garcia. For his part, Garcia was born in Southern California, but he’s fought twice in Texas in recent years against Sergey Lipinets and Ramon Martinez.

The unbeaten Garcia will be moving up in weight from the 135 lb weight division to face Spence at 147. This will be highest weight of Garcia’s career. Last March, Garcia moved up to light welterweight to defeat IBF 140 lb champion Lipinets (14-1, 10 KOs) by a 12 round unanimous decision on March 10 in San Antonio, Texas. Garcia vacated the IBF 140 lb title after the International Boxing Federation ordered him to defend against unbeaten mandatory challenger Ivan Baranchyk (19-1, 12 KOs). It’s going to be tough on Garcia moving up to welterweight from lightweight to take on Spence. Garcia ha never fought at 147 before during his career, and it’s going to be a considerable jump up in weight and class in taking on a fighter with Spence’s size, talent and punching power. Spence is considered a small junior middleweight in the eyes of a lot of boxing fans. Spence looks huge after he rehydrates for his fights at welterweight.

Mikey Garcia brought in a huge crowd for his last fight against former IBF lightweight champion Robert Easter Jr. last summer on July 28 at the Staples Center in Los Angele, California. Garcia, who had his WBC lightweight title on the line, defeated Easter by a 12 round unanimous decision by the scores 118-109, 117-110 and 116-111. The in for Garcia added a second title to his possession, making him an IBF/WBC unified champ. A large crowd of 12,500 showed up to see Garcia defeat Easter Jr. Although Garcia failed to knockout Easter Jr. in the fight, it was still an exciting contest to watch from start to finish.

Garcia vacated his IBF lightweight title recently after he was ordered by the IBF title defend the belt against mandatory Richard Commey. That was a fight that was less than appealing to Garcia, who only wants to be involved in the bigger fights right now with his career.

Mikey will be looking to capture his 5th division world title against Spence on March 16. Mikey has previously won world titles at 126, 130, 135 and 140. It’s thought by some that trying to win a world title at 147 is an overreach for the 5’6″ Garcia, especially with him targeting arguably the best fighter in the division in the 5’9 1/2″ Spence.

Spence will be enjoying a 3 1/2″ height and a 4″ inch reach advantage over Garcia, as well as a considerable weight and power advantage. There’s no way of knowing right now how much heavier Spence will be than Mikey by the time the two fighters step inside the ring on March 16, but it wouldn’t be surprising if 15 lbs separates the them. It might even be more than that. Garcia will obviously bulk up for the Spence fight, but he’s still going to be out-sized by him. It rarely works well for fighters when they bulk up to face a naturally bigger guys.

Spence is a huge puncher with either hand, and he likes to take out his opponents with body shots. We saw Spence’s body punching on display in his last three fights against Ocampo, Lamont Peterson and Kell Brook. Spence also destroyed former WBO light welterweight champion Chris Algieri with body shots.

Mikey looked soft when he bulked up to fight Lipinets for his IBF 140 lb title earlier this year in March. Mikey supposedly walks around in the low 160s, but he looked flabby and not solid at that weight.

This is a fight that won’t give Spence much credit from the boxing public. Mikey is the only guy that will come out of the fight as having a chance to get credit from the fans, since he’s moving up two weight divisions to take on Spence for his IBF 147 lb title. You can’t fault Spence for giving Mikey the title shot, as it’s a great payday for him, and it’ll help increase his popularity in the boxing world. A vicious knockout win for Spence will probably be ignored by a lot of fans, as they’ll see him as being a weight bully against a smaller, braver fighter. Spence hasn’t shown the desire to move up two weight classes to take on middleweights, which is what he would have to do for him to be given credit in the same way Mikey will be. If Spence loses or struggles to beat Mikey, he’ll be ridiculed by the boxing public for failing to destroy the smaller guy. In other words, Spence is in a no win situation in fighting Mikey. But he needs to take the match because the money is too good for him not to take it.

Mikey is going to need to carry his power up with him for him to have a chance of stopping, hurting or slowing down Spence. Mikey’s power didn’t look impressive in his two fights at 140 against Lipinets and Adrien Broner.