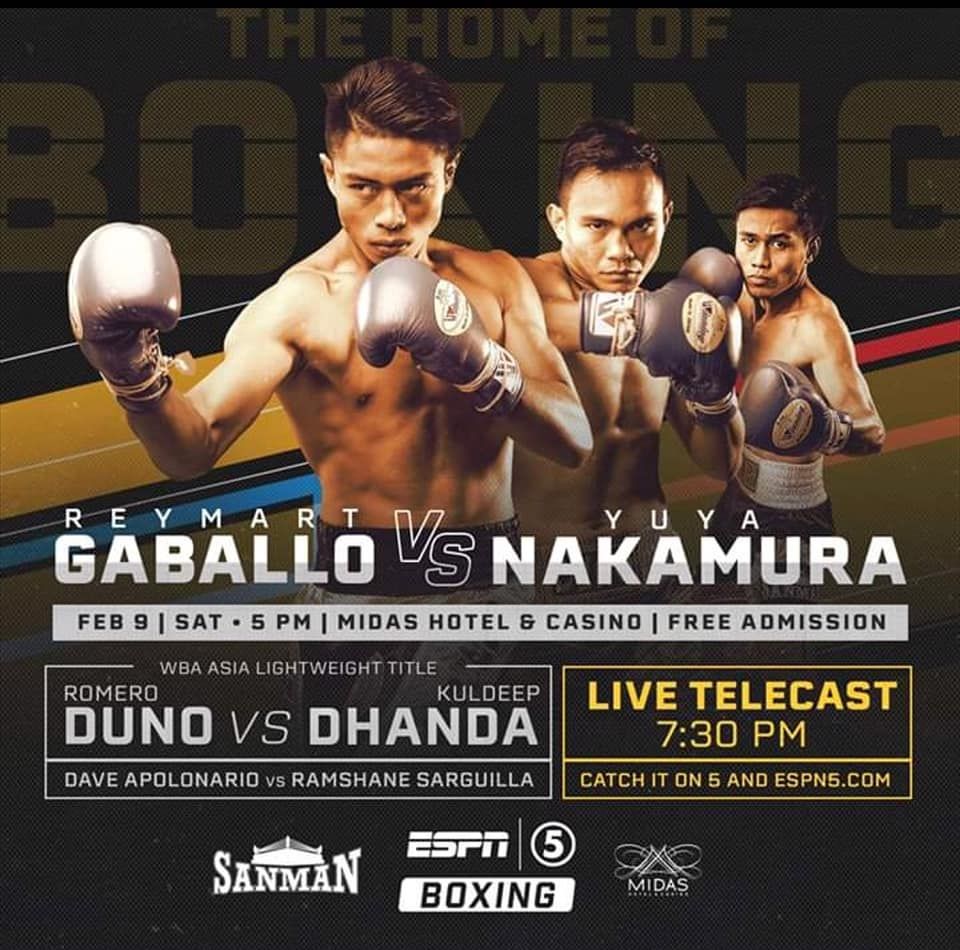 The unbeaten Gaballo, 22, managed by Asian award-winning promoter JC Manangquil of Sanman Boxing, comes from a quick round one demolition of African fighter Julias Kisarawe last September here in Manila, while Nakamura, 28, lands-in from a hard-fought majority draw last December in China.

The battle is largely perceived by local fans as a stay-busy job for the skilled Gaballo ahead of more challenging fights; however, Nakamura arrives in the Philippines aiming at Gaballo’s head, knowing too well that a decisive victory over the Filipino WBA titlist would open for him golden gates.

“Much at stake for Gaballo here. He better watch-out for that glory hungry fighter from Japan,” commented a boxing fan in the promoter’s Facebook page. “No boxer from the Land of the Rising Sun should ever be taken lightly.”

In the televised co-main feature, Sanman star “Ruthless” Romero Duno (18-1, 14 KO’s) collides against Kuldeep Dhanda (7-1, 1 KO) of Chandigarh in northern India in a war for the vacant WBA Asia Lightweight crown; the winner claiming coveted shining belt, plus a place in the WBA 135 pound world-rankings.

The 23 year-old Duno – back in his native Philippines after wins in Indio, California, and the Forum in Inglewood – aims at pushing his boxing career forward at the expense of the strong, but less-experienced Dhanda.

Will Duno be able to earn belt and ranking in one big rewarding sweep Saturday on ESPN5? Or will Kuldeep Dhanda dig deep into his fighting spirit to rock and punish the “Ruthless” Sanman warrior?

Also, in an intriguing, well-matched collision between young Cotabato boxers, the “Doberman” Dave Apolinario (9-0, 6 KO’s) of the Sanman stable climbs the ring to engage”The Hammer” Romshane Sarguilla (7-1-2, 4 KO’s) in an 8-chapter saga in the flyweight division, both fighters coming-in from impressive wins, and wanting more.

Plus, unbeaten Presco “Carjun” Carcosia (4-0, 4 KO’s) of General Santos City battles 7-year-veteran the “Amazing” Renerio Arizala (13-8-2, 5 KO’s) of Bacoor, Cavite, in an 8-rounder in the featherweight division. Will the young gun overpower and demolish the more-experienced warrior.. or will it be the other way around?

Moreover, undefeated “Iron Fist” Jerven Mama (8-0-1, 5 KO’s) of General Santos City, a young gladiator of the Sanman Stable, trades leather against tough-as-nails 23 year-old Mervin Lulu (5-4-2, 2 KO’s) of the Municipality of Bagumbayan in Sultan Kudarat. Their war is a 6-rounder rumble at a contracted-weight of 114 pounds that might not make it the distance.

In another exciting clash, unbeaten Sanman fighter Rolando “Momoy” Servania (7-0, 3 KO’s), brother of world-ranked featherweight Genesis Servania, battles veteran southpaw Arnel Caoctoy (6-6-1, 2 KO’s) of the seaside city of Ormoc in western Leyte. Their duel is a scheduled six-stanza battle in the 122 pound division, and may the best man win.

Furthermore, unbeaten hard-hitting cruiserweight Muhamad Farkhan (8-0, 8 KO’s) who hails from the Malaysian city of Johore Bahru (bordering Singapore) gets into a concert of knuckles against “The King Killer” Michael Speed Sigarlaki of Jakarta, Indonesia, in an intense 8-round melee that might not make it to the final bell.

The official weigh-in ceremony supervised by the Games & Amusement Board (GAB) will take place at Midas Hotel & Casino at 10 AM, and boxing fans are cordially invited.

This exciting Saturday card in Manila, headlining Romero Duno of the Philippines vs Kuldeep Dhanda of India for the WBA Asia Title is a production of young Award-winning promoter JC Manangquil of Sanman Boxing Promotions in association with the Midas Hotel & Casino and ESPN5 Philippines.

The author Carlos Costa is a Panama-born fight reporter living in Cebu, Philippines. Carlos can be reached by email carlos512@hotmail.com and whatsapp +639184538152.