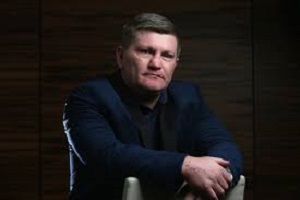 Former world champion Ricky Hatton spoke to Sky Sports about the potential for a fight between long-standing rivals Amir Khan and Kell Brook now that Khan has signed on with Matchroom. Hatton suggests, considering where both fighters currently stand in the respective careers, that the fight could mark a definitive moment for both.

“It’s one of those exciting fights, it’s like a 50-50 one, you toss a coin because they’re both that similar and are at similar stages of their career.

“It would be a defining fight for both, the loser then retires and the winner moves onto bigger and better things.”

Like most fans, Hatton says he would’ve loved to see the fight happen a few years ago, but now worries about where Khan is since being knocked unconscious by Canelo Alvarez in his last outing.

Brook himself hasn’t had the best of fortunes over his past couple fights, having both of his eye sockets broken in consecutive bouts against Gennady Golovkin and Errol Spence Jr., and hasn’t fought since May of last year.

Even still, Hatton is hoping for the best for both fighters, but isn’t emphatic about making a choice between Khan and Brook because he’s friends with both guys.