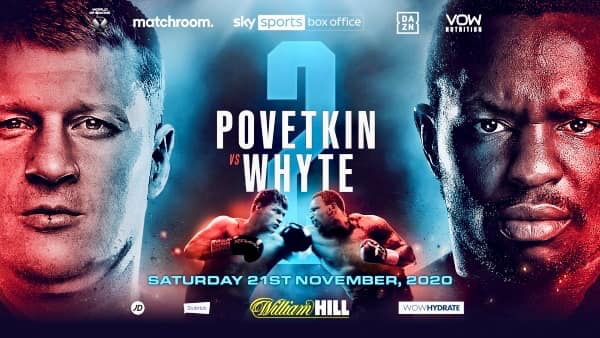 Thrilling Povetkin vs Whyte Rematch on Nov 21 in the U.K.

Russian WBC heavyweight interim champion Alexander Povetkin (36-2-1, 25 KO’s) will defend his title in a hot rematch against former British champ Dillian Whyte in a stellar battle November 21 in the UK.

Whyte (27-2, 18 KO’s) will have his golden chance to get revenge on the tough veteran man who brutally knocked him out last month.

Will Povetkin stop Whyte in a sensational way again, or will it be the other way around..??

Because it’s unlikely that the thriller might not make the distance, and who will emerge victoriously?

This can’t be missed!

The slugfest is promoted by Eddie Hearn’s Matchroom Boxing live on DAZN.

Povetkin vs Whyte in exciting heavyweight action Nov 21 in the U.K. May the Best Man Win..!!