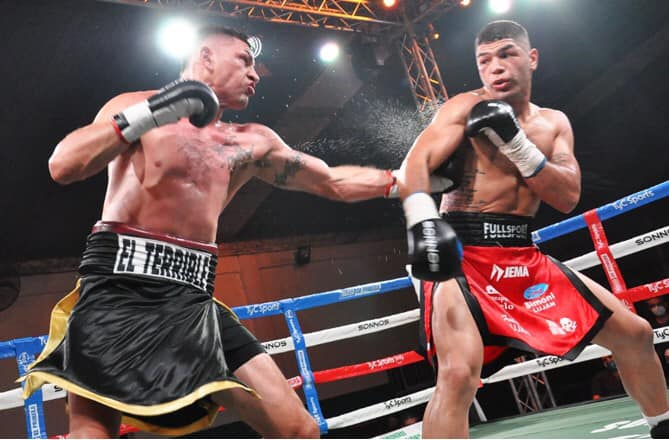 A great evening of double depth with the dispute of two Argentine titles will kick off the 2021 promotions of Sampson Boxing and Tello Box with the transmission of TyC Sports, in this case from the Eva Municipal Sports Center Perón de General Madariaga (province of Buenos Aires) on Saturday, January 23.

In one of the stellar lawsuits, there will be a rematch between the alternative national champion of the super middleweight, Marcelo “Terrible” Cóceres, from Entre Ríos, and Sebastián “La Promesa” Papeschi from Buenos Aires, who already faced each other on November 13 in Luis Guillón ( Bs. As) with a close victory by the decision of the first.

Cóceres (29-1-1, 15 KO, representative of Argentina Boxing Promotions, by Mario Margossián) and Papeschi (15-3-0, 6 KO, backed by Sampson / Tello) will meet again in the framework of the back and forth crosses between promoters that aim to enhance Argentine boxing and the TyC Sports screen.

That evening of Luis Guillón, which ended with the aforementioned victory of Cóceres, was promoted by Margossián and now it is the turn of Sampson / Tello.

The other fight in the background will be the one held by the Buenos Aires Juan Hernán Leal (11-1-0, 4 KO) against the always complicated Buenos Aires Alfredo Rodolfo Blanco (21-8-0, 11 KO) while the Argentine weight title is in dispute welterweight that is vacant.

On the card there will be four other professional fights, standing out for one of the complements, the presence of the undefeated Dominican super bantamweight based in Necochea, José Alberto Arias (4-0-0, 1 KO).

In the coming days, we will release more details about this great boxing show.