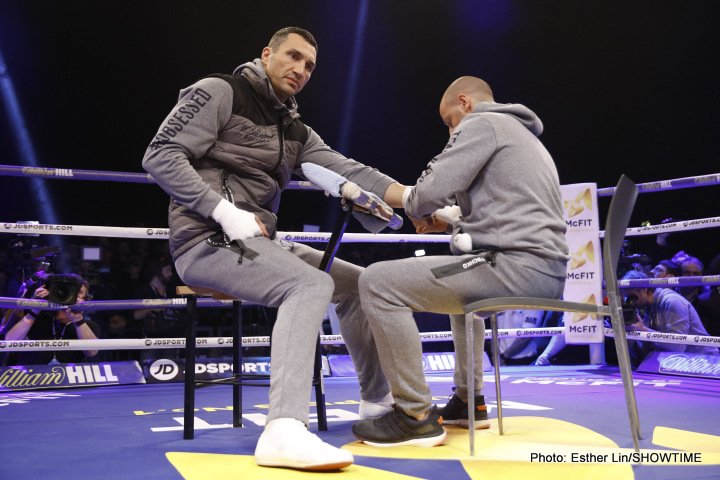 Audley Harrison isn’t planning a return to the ring (some fans, upon reading yesterday’s tweet by “A-Force” that said he is considering getting back into boxing in 2019, but as a trainer or manager, got the wrong idea) but former world ruler Wladimir Klitschko isn’t ruling one out. Well, not totally. Speaking with Fox Sports, Klitschko said he would consider a ring return if it gave him the opportunity to make history, for example by becoming the oldest man to rule the heavyweight division.

“It would have to be something extraordinary, [something] incredible. I’ve still got it, but I don’t know for how long I’m going to remain in the same shape,” Klitschko said when asked what it would take for him to box again. “But if I can become a 45 year old, a 46 year old, and I’ve still got it, and still have sparks in my stomach, I would think that this extraordinary moment could be to break the record and become the oldest heavyweight champion. Obviously, right now there is only one guy, George Foreman.”

Foreman of course fulfilled his unlikely dream when he sensationally KO’d Michael Moorer to regain the word title, at the age of 45 years and nine months, in November of 1994. Klitschko, who does indeed look to be in great physical shape right now, turns 43 next March. Would Wladimir really look at coming back two or three years after his 43rd birthday? We fans have learned to never say never, as we have seen far too many improbable, even shocking comebacks launched by former champions. How shocked would you be if Klitschko really did fight again?

The chance to make sporting history is something none of us mere mortals will ever have of course, but Klitschko, still in possession of a healthy ego, could achieve it. Maybe the idea of being placed on a whole unique page of his own in the history books will indeed lure Klitschko back into the ring. In 2021 or 2022!

As things stand now, “Dr. Steel Hammer” is a lock for The Hall of Fame and he will be remembered as one of the heavyweight greats.