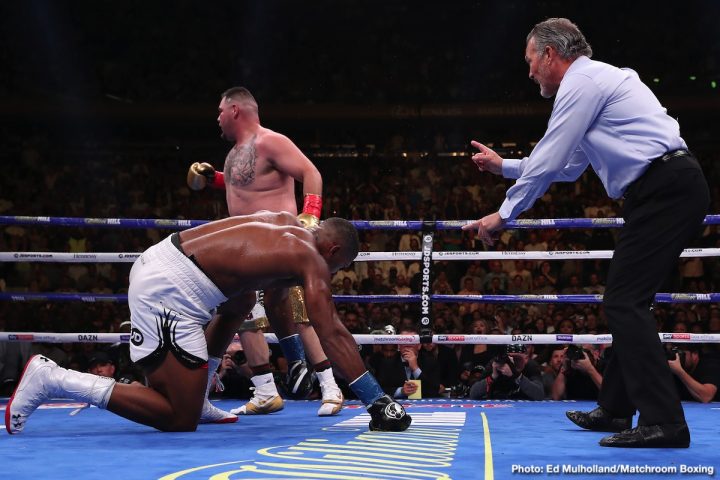 By Charles Brun: Anthony Joshua is vowing to become a two-time heavyweight world champion ahead of his rematch with Andy Ruiz Jr. Joshua (22-1, 21 KOs) says he thinks he can get it right the second time around against the American Ruiz Jr. (33-1, 22 KOs), and his promoter Eddie Hearn is 100 percent behind him with his decision. Is it stubbornness or is Joshua completely deluded in choosing to face Ruiz Jr. a second time?

On social media, Joshua is being torn apart by boxing fans for saying he’s going to be a two-time world champion.  The fans don’t believe, and many of them see him suffering the same fate against Ruiz.

Hearn says he wants the Joshua-Ruiz rematch in Cardiff, Wales instead of in New York, which has some boxing fans believing that we may see a quick stoppage or odd scoring in favor of Joshua.

Joshua committed to winning back his titles

“I think I can get it right, and that’s I’m taking the rematch and activating it immediately,” said Joshua about wanting to fight Ruiz Jr. a second time. “True failure is in quitting, I don’t think you should give up when you meet a blip in life. Ruiz. I feel like I can get it right. That’s why I wanna take this rematch. My ambition in boxing at the minute is to be two-time heavyweight champion of the world.”

Joshua was knocked down four times in the fight with Ruiz Jr. before the referee stopped the fight in round seven last June at Madison Square Garden in New York. There’s no question that the referee did the right thing in stopping the fight in the seventh. Joshua had been knocked down twice by Ruiz Jr. in that round, and he spat out his gum-shield.READ  Anthony Joshua vs. Andy Ruiz Jr. rematch likely for Cardiff says Hearn

Joshua had fallen apart against Ruiz:

Joshua looked in a daze after the second knockdown in the round. It wouldn’t have mattered if Joshua had been allowed to continue. He had no punch resistance by that point in the fight, and Ruiz was embarrassing him with his flurries. Joshua was getting knocked every which way but loose.

Joshua may become a 2-time heavyweight champion, but maybe not against Ruiz

It would be a good idea for Joshua to keep his options open if he’s beaten by Ruiz Jr. in the rematch. Hopefully, Joshua is smart, and goes after another champion to try and become a two-time heavyweight champ, because Ruiz Jr. might have his number. What boxing fans don’t want to see is Joshua stubbornly fighting Ruiz repeatedly, and losing each time. It’ll be forlorn after the second defeat for Joshua.

If Joshua asks for a third helping from Ruiz, someone needs to step in and save him from himself. Ideally, Hearn should be doing that right now, but he’s acting passive when it comes to steering Joshua in the right direction.

Hearn should be telling Joshua to steer clear of Ruiz

An old school promoter would forcefully let Joshua know that he’s not going to let him fight Ruiz Jr. again, and he would likely follow their directions. But with Hearn, he’s being permissive, and letting Joshua guide his own career. It’s supposed to be the other way around, but Hearn isn’t an old school promoter. Boxing greats Lennox Lewis and George Foreman don’t like the idea of Joshua fighting Ruiz again at this point. Lewis is recommending Joshua get a new trainer, but he’s not showing that he’s going to do thatREAD  Hearn expects to decide Joshua vs. Ruiz Jr. rematch venue this weekend

Ruiz Jr. is the wrong champion for Joshua to be fighting for him to be attempting to become a 2-time champ. If he were to target WBC champion Deontay Wilder, he might stand a better chance of winning. Of course, the negotiations would likely make it hard for Joshua to setup a fight with Wilder, but it’s possible, as long as Hearn is wiling to give him the 50-50 deal he’s been asking for.