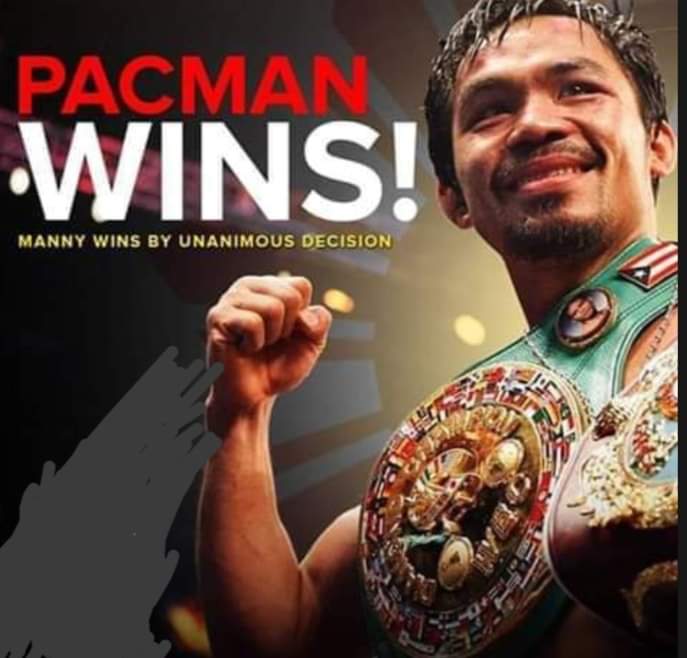 Forty and hasn’t ascended from his boxing powers, Filipino pride Manny Pacquiao proved his footwork and lefty punch still works their magic as he came crushing on Ohio’s Adrien Broner at a star-studded night at the MGM Grand Las Vegas.

Earlier in the rounds1 and 2, Pacman’s angles with his in-and-out combos went unanswered several times as The Problem ducks and used his shoulder rolls to evade MP’s barrage of punches. Round 3 saw an MP moving forward with his right jabs and catches AB with left hooks, round 4 saw an MP landing right jabs and moves forward while AB catches Pacman with a right cross. 5th round makes AB aggressive as he counters MP with a fast left cross but misses and landed a jab-straight in the second minute. Onto the 6th round, MP attacks with a series of combos, AB catches MP with counter combos to include an upper-hook to end the round. The 7th round started with MP trying to land his combos but missed afew, moved on to catch AB on the ropes as AB clinches him down. 8th round was a slow round but MP manages to push the score. Round 9 gave MP an edge with his right hook-jab combination and rocks AB with a series of combos. 10th round gave Broner some space to land but Pacman’s defenses couldn’t be probed. Into the 11th round, MP sees his advantage and gives combos and ducks like his movements were on auto-mode. Broner circles MP and managed to connect some solid punches. The last round saw the two boxers exchange barrage of punches as Pacman outlands Broner. In their 12-round duel, Pacman showed his might unanswered by Broner’s.

Pacquaio’s confidence overlooked Broner’s height and reach advantage as the latter cannot keep up with Pacman’s unpredictable footwork and set-ups.

Both 11 wins at Flyweight andWelterweight, Pacman-‘s camp made sure of a 12th win in the welterweight division.

Mayweather on a ringside interview just before Pacman and Broner saw action said he fought Manny and knew he was one of the best fighters and while he hasn’t fought Broner, he knew the younger pugilist has something to showcase.