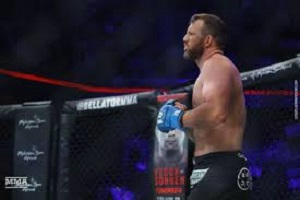 Sitting atop the Bellator light heavyweight division, Ryan Bader gets to call the shots.

And one thing he’d like to do is avenge a six-year-old loss to Lyoto Machida.

Both signed to Bellator now, Bader and Machida clashed back when they were members of the UFC roster at a UFC on FOX show in Los Angeles back on Aug. 4, 2012. “The Dragon” was coming off of a failed title bid against Jon Jones and was expected to provide a gauge for how far along Bader was in his own development as contender.

The two-time All-American wrestler was unable to solve the puzzle of Machida and fell to a one-punch knockout in round two, a finish that became embedded in Machida’s highlight reel.

Both men continued on in the UFC for several years with varying degrees of success until Bader made the jump to Bellator in June 2017 and immediately won the promotion’s light heavyweight belt by outpointing rival Phil Davis. He has defended it successfully once and is now poised to become a two-division champ when he meets Fedor Emelianenko for a vacant heavyweight title in the finals of the Bellator World Heavyweight Grand Prix on Jan. 26 at The Forum in Inglewood, Calif.

On a media call Tuesday for Bellator 214, Bader was asked if Machida was an opponent he’d like to defend his 205-pound championship against once he’s finished with the Grand Prix. Machida recently made a successful debut with a split decision win over former middleweight champion Rafael Carvalho and once held the light heavyweight title in the UFC.

“Hell yeah,” Bader said. “He’s one of those not-good highlights for me when they’re showing him and I’m rushing in and getting knocked out. I had no idea what the hell I was doing back then striking-wise in — I can’t even remember how many years that was, but I definitely would like to get that back and it’s a big fight. I’m looking to get into these big fights.

“I have one in front of me, we’ll see what happens, we’ll kind of see where we go from here. But that’s a fight I definitely want.”

Bader, Davis, Machida, Quinton “Rampage” Jackson, Tito Ortiz, and Chael Sonnen, are just a few of the UFC standouts that have made their way to Bellator over the last few years who are competing or have competed at 205 pounds. While there’s plenty of name value there, Bader does not have a clear No. 1 contender waiting for him whenever he’s able to defend that championship next.

Though he couldn’t specify if there were any free agents he’d be interested in fighting in the future, Bader expressed his confidence in Bellator officials finding suitable challengers for him when the time comes. At the very least, he sees his current situation as being comparable to or even better than his old one.

“I haven’t really thought too much about it,” Bader said. “I don’t feel the UFC’s light heavyweight division is very deep at all, I think there’s a handful of guys, they keep kind of regurgitating guys fighting for the belt and whatnot. So there’s really not too many to pull from there.

“There’s always guys floating around, but I haven’t really even thought about it too much. Bellator’s doing a great job attracting these guys, these high level guys, and that’s gonna come with just a little bit of time and the word’s getting out. We’re treated well over here, we have opportunity. For example, being able to fight in this Grand Prix. We saw Darrion Caldwell go out and fight in Japan and all that kind of good stuff, so that’s attractive to us and you’re going to see more guys kind of coming over and that’ll fill out the ranks.”

Bader is taking a wait-and-see approach to 2019, though he is remaining firm on his stance to hold and defend two titles should the opportunity arise. An opportunity that depends on him getting past “The Last Emperor”.

“I’m gonna kind of cross that bridge when it comes,” Bader said. “I’ve got this fight in front of me, I don’t like to look too far ahead, but I will be holding both titles and I don’t think feel like there’s a clear-cut 205-pound contender out there. There’s a couple in the mix, but I don’t think really one’s separated himself from the rest of the pack there. So I don’t believe there needs to be an interim belt or anything like that right away.

“We’ll see. I have to go out there and I have to win this fight to have two belts and so that’s my focus right now.”