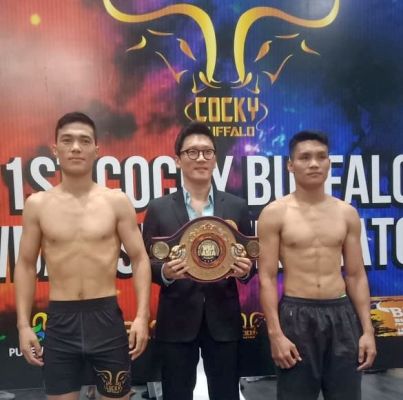 The taller, more aggressive Pulatov, 27, who weighted in at 69.6 kilos, proved to be the superior fighter throughout the 12-round combat that entertained the fans in attendance at the city’s District 7 Arena. Official scores were 118-110 and 119-111 (twice) all in favor of the Uzbekistan warrior. The third man in the ring was Byung-Moo Kim and the supervisor for the WBA was Won Kim of Korea.

In the co-main feature, 23 year-old Russian super lightweight Mikhail Lesnikov (3-2, 1 KO) came out from his red corner swinging wild to roughly punish unheralded Indonesian Afrizal Tamboresi (11-10, 6 KO’s), dismantling him half-way through the very first chapter. Official time was 1:17 in round one. It was Lesnikok’s first scalping outside of his native Russia, and he wants more.

Also, after a 2-year hiatus Vietnamese super lightweight Van Chung Nguyen (2-0, 1 KO) comes back the ring to scored a unanimous decision win over young 18 year-old warrior Joon Kyoo Oh (2-2, 1 KO) of Korea. Some ring rust was evident on Nguyen, however, the victory motivates the 23 year-old to ready himself for more exciting action.

In addition, super bantamweight Ravshanbek Shermatov (3-0, 1 KO) of Andijan, Uzbekistan, outclassed Indonesian warrior Wado Sabu (13-14, 3 KO’s) in their 6-round thriller. Scorecards were unanimous for Shermatov who Saturday weighed-in at 55.2 kilos.

In a lightweight rumble, Vietnamese Dinh Hong Quan (2-0-1, 1 KO) decisioned 23 year-old Korean Suk Joon Hwang (3-3-3, 0 KO’s). Tallies were unanimous for Quan who fought for the first time as a pro in his native Vietman. His previous battles were in South Korea.