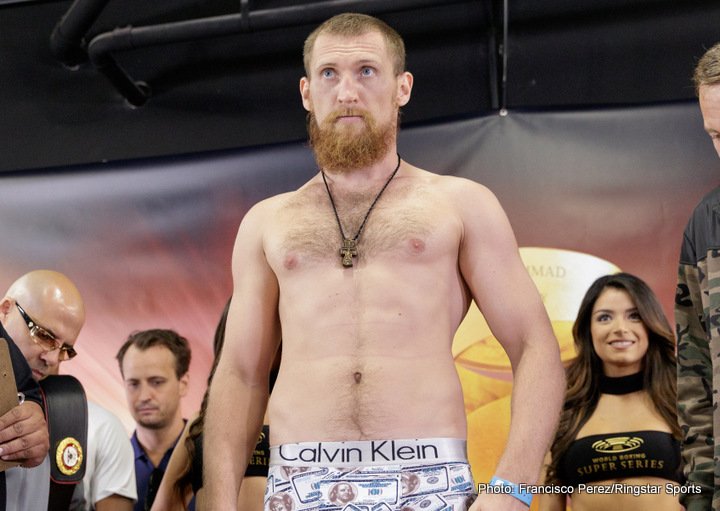 Like so many other boxers who are tempted to try their hand at MMA, and vice versa, with a number of MMA guys making the move to the boxing ring, Russian power-puncher Dmitry Kudryashov is to have his MMA debut in his homeland on October 12, against TBA.

So reports Boxinginsider. The cruiserweight who has an all-action style might be making the move due in large part to the bad run of defeats he has suffered over the past couple of years or so. Kudryashov, 23-3(23) can really bang yet the unfortunate combo of his suspect chin and leaky defence has seen him come a cropper in his biggest fights: losing inside the distance thrillers with Olanrewaju Durodola (this 2015 loss being avenged later), Yunier Dorticos (in a WBSS bout) and, last time out, Ilunga Makabu.

At age 33, “The Russian Hammer” may or may not be a little too long in the tooth to be successfully able to make the transition to another combat sport. Still, with his sheer power, his aggression and the admirable blend of guts and courage Kudryashov has shown in the ring it sure could prove a whole lot of fun finding out.

“It would be correct to say that October night in Moscow will be headlined by Dmitry Kudryashov,” Gadzhiev told Boxinginsider. “About a year ago we happened to talk with him about a possible MMA fight. I have cherished the idea for a long time.”

It’s likely the upcoming card will attract quite a lot of attention, and a large live gate, seeing how big a name Kudryashov is in Russia; that and his fan-friendly style. But again, how will the 33 year old cope in terms of learning all the additional MMA moves such as take-downs and kicks? It will be interesting to see if Kudryashov can string together a few wins in MMA and whether or not he decides to stay in his new sport full-time.

Boxing would miss him if this proved to be the case, but it could prove to be MMA’s gain. Win or lose, Kudryashov is never in a dull fight.