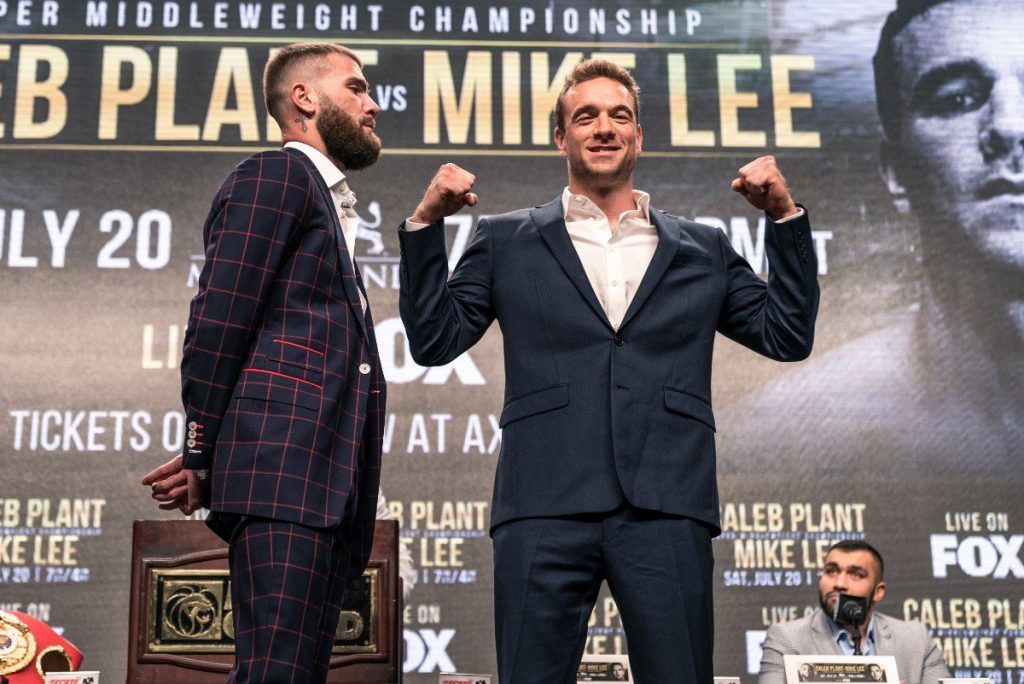 Also squaring-off at Thursday’s press conference and kicking off the broadcast at 7 p.m. ET/4 p.m. PT were unbeaten rising heavyweights Efe Ajagba andAli Eren Demirezen, who compete in a 10-round attraction.

Tickets for the event, which is presented by Sweethands Promotions and TGB Promotions, are on sale now and can be purchased online through AXS.com, charged by phone at 866-740-7711 or in person at any MGM Resorts International box office.

Here’s what the fighters had to say on Thursday.

“I’ve been saying it the whole week during my interviews. It was a goal to become a world champion, but it was not the only goal. I will be defending my world title successfully and in fashion come this Saturday. I’m encouraging everyone to tune-in, because it will not go 12 rounds. He’ll either wave the white flag or I’ll wave it for him.

“If you’ve been paying attention I’ve been telling everyone I’m in better shape than I was for the Jose Uzcategui fight. I’m hitting harder and my sparring has been better. You will see a new Caleb come this Saturday.

“He’s never fought on a stage like this and to be honest neither have I. This is my first time being on FOX. I feel like I am more prepared than he is. I have been in tough fights and I have been through the fire so I know I am prepared.

“I keep grinding because if you don’t you will fail. With every decision you can take two roads. You can take the wrong one or the right one. Sometimes there are gray areas but when it comes to your question, there’s no gray areas, it’s either you work or you don’t eat. There isn’t a back-up plan for me.READ  Caleb Plant talks preparation for Mike Lee fight on July 20

“I’m not really a new school guy. I don’t really do all the visual stuff & the new aged technology. I do old school boxing stuff. I hit the bag, I hit the speed bag, I hit the heavy bag. I spar, I run, I have a great strength & condition coach and we do a lot of sprints. We do a lot of difficult stuff which is high caliber, but I’m old school.

“There are zoo lions and there are jungle lions and the zoo lion will look at the jungle lion and think they are the same thing. But it’s all the peace that he’s had throughout his life that’s cost him his strength. And all of the victories he’s had throughout his life that’s made him weak. But from a distance they look the same. Until it’s time to eat or be eaten.

“Taking the title away from me is a tall order. I know what I am willing and prepared to do to keep that title, I don’t know if there’s too many other guys in this sport who are willing to do the same thing.

“A lot of guys in the business are starving themselves to make weight but we don’t believe in that. You stay in shape all year and you do your job all year. This is not a seasonal sport. This is a lifestyle. If you aren’t going to make it a lifestyle, then don’t even get into it. This is something I work hard all year around so I get to eat good all year around. My spirits are up, I feel good, I feel strong and I’m just excited to be here in front of all of you guys.”

“I’m excited for this fight. It’s a great opportunity and I’m going to give all the fans a show.

“I live in the present moment. That’s all I care about is this moment. You can see when I hop in the ring, I’m smiling and having fun. That’s me. When I’m having fun and I am doing my thing, that’s when I perform the best.READ  Mike Lee talks Caleb Plant during Los Angeles media workout

“The trash talking goes back and forth, that’s been as old as time. Nothing he’s saying is new. It’s all recycled stuff he’s heard on TV or heard in movies. It’s nothing new to me. It doesn’t even bother me. I laugh at it.

“It’s been beautiful losing those seven pounds. You saw us standing next to each other. You saw how skinny and little he looked and how big I looked. We are going to get down to 168 the exact time we have to and then we are going to hydrate and come back up.

“You have seen me in media workouts. You see me working out. Here we are a few days away from weigh-in and I don’t look depleted at all. I am going to step on that scale with no worries and come fight night he is going to feel why I am a 175-pound fighter.

“Maybe I should have fought at 168 sooner because 175 wasn’t difficult and 168 isn’t too difficult right now. I think once I win this belt I will be happy to defend it at 168.

“I hope he exchanges. I have the power, speed and boxing ability. Whether I end it early or late, I am going to be there and on him. I hope he comes forward and exchanges. I would love that.

“Anything Plant says doesn’t concern me. You can see my speed, my power, my strength and my mindset. That’s what wins fights. So I’m here to win and take that belt and hear ‘and the new!’

“I was born for these moments. I love the crowd and the intensity. It’s going to be an incredible night live on FOX.

“Coming down to 168-pounds has been easy. I have an awesome team behind me and a phenomenal nutritionist. I should have cut down earlier. I’m excited and am going to make the most of this moment.

“This is when I shine. The fact that this fight is on FOX and millions of people can watch is incredible. Everybody here in Las Vegas should come to MGM Grand and watch me knock this guy out.”

“Every fight I’m in is a big one. Saturday night is going to be show time. I get to show what I do, because I train very hard. I train two hours a day, sometimes three times a day to get better.READ  Photos: Manny Pacquiao and Keith Thurman grand arrivals in Las Vegas

“There’s no way this guy is going to beat me. I’m going to stop him in round one or two.

“My opponent loves to fight. But, I do too. I love to fight and I love to box. When I fight him, I will knock him out.

“This is my chance. This is my dream. The fans motivate me. It’s on my mind and in my dreams to become a champion. My time is coming. It’s not now, but it’s coming, so I need to keep climbing.”

“I am ready for Saturday night. It is a huge fight for me and I will be the winner. Efe Ajagba is just another fighter in my way. If I cannot beat Efe Ajagba, then I don’t need to fight anymore.

“I am working hard in training for this fight to be at my very best. My knockouts come from my hard work and I want another one on Saturday.

“I know Efe Ajagba from the 2016 Olympics. The last two or three months I have watched his fights because Ajagba fought someone else from our team, Mike Wallisch.

“Ajagba is nothing special when you watch him. I fully believe that I will knock him out.

“Ajagba has too much pressure on him because everybody expects a lot from him. His opponents have not been very good. Ajagba wants to use me like stairs but I will use him. My final destination is the heavyweight world title.

“I took this fight so that I can get even bigger fights. I am able to show the United States that I am a warrior and a good fighter. It was my dream to be a fighter and I’m going to show my skills this Saturday.”