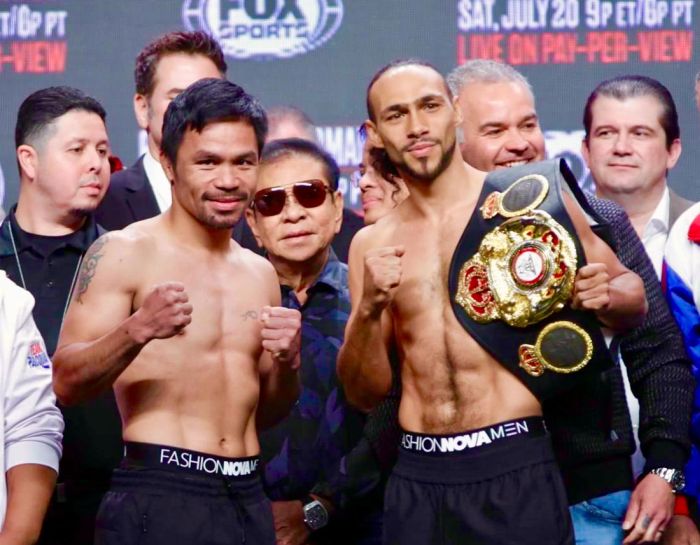 Both men looked confident and in excellent shape ahead of their hot rumble that many fans think will not to make the distance.

Even after going through tough moments in his last fight against Josesito Lopez (36-8, 19 KO’s), Keith Thurman is without a doubt the most difficult opponent that the fast Pacquiao has battled during the last two years of action.

Adrien Brotner and Lucas Matthysse (now retired) weren’t any any rate close to the quality Pacquiao packs. Thurman (29-0, 22 KO’s) is by far a more complete fighter, an undefeated welterweight of speed, who can both punch hard and box well at all times. Plus, Thurman is by 10 years, the younger man.

Will the thrilling battle make it to the final bell? Will Pacquiao manage to find his range and fantastic rhythm to put Thurman in trouble and in defensive mode?

“I have something to prove,” shared Pacquiao with the media in Las Vegas.

It’s likely that the thought that Pacquiao (61-7-2, 39 KO’s) wants to convey is that at 40 years-of-age, he is still the king of boxing, defeating in exciting fashion elite younger fighters. His hordes of fans around the world think, yes he can.

Or will it be “One Time’s” time. Will the unbeaten Keith Thurman be the one to dictate how things will be on top of the blue canvas? Is his elbow absolutely, totally healed? Is his faith in his skills still there, as it was prior to his rough world title rumble against tough Puerto Rican-American Danny Garcia (35-2, 21 KO’s)?

Fans are on for a thrilling ride, which hopefully, will not be marred by any accidental non-intentional headbutt due to the inverted guards (Pacman a southpaw, Thurman an orthodox), and the thunderous speed of the fighters.

The fantastic clash — one of the most anticipated in this 2019 — most likely will not fail to meet expectations due to toughness and proven fighting skills of the warriors; and fans just can’t wait, and bets in Vegas and around the world keen on going hot.

Pacquio is as of now favorite -140 for Thurman +170, and more fans are placing bets as fighting time drives closer.

WBA President Gilberto Mendoza is in Vegas for the exciting battle. Supervisor for the WBA is Jose Oliver Gomez of Panama.

Pacquiao vs Thurman for the WBA Welterweight Super Championship is a production of TGB Promotions – Tom Brown, in association with MP Promotions – Manny Pacquiao.

May the best man win.

.
The author Carlos Costa is a veteran man of boxing born in Panama, living in the Philippines. Carlos can be reached at carlos512@hotmail.com and whatsapp +639184538152.