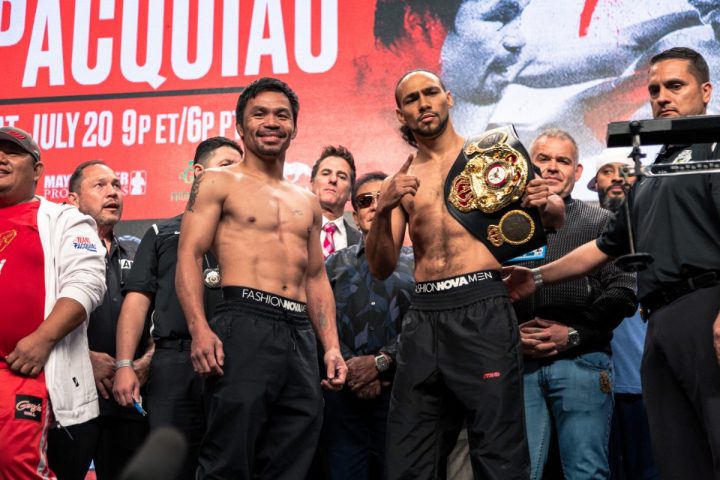 By Allan Fox: Manny Pacquiao is getting a guaranteed purse of $10 million for his title fight against WBA Super World welterweight champion Keith Thurmanon Saturday on Fox Sports pay-per-view at the MGM Grand in Las Vegas, Nevada. Although Thurman has had a difficult time agreeing that he’s the B-side in the promotion, his $2.5 million purse makes it clear that Manny is the A-side.

Will Thurman stick around after getting his payday?

Pacquiao and Thurman will wind up with many more millions than just their guaranteed purses. Once the pay-per-view upside money rolls in, they’ll be sitting pretty. The positive for Thurman is he’s getting a career high purse. The negative is we might see less of him. Some fighters disappear after they get  a huge payday, as they want to take spend the money. when they do return to the ring, they’re often nowhere near as good as they were before.

Could this be the beginning of the end for Thurman as a major player in the welterweight division? It’s highly possible. Some boxing fans believe the real reason for Thurman’s slow return to the ring after suffering an elbow injury in 2017 in his unification match against Danny Garcia was he wanted to enjoy the money he made in that fight.

Pacquiao warns Thurman that he’s about to be schooled:

This is definitely a big step up in class for Thurman from the fighters that he’s been facing in the past. Danny Garcia and Josesito Lopez didn’t put a lot of pressure on Thurman until the second half of their fights. This enabled Thurman to put a lot of rounds in the bank before those two fighters went on the attack. In Shawn Porter’s case, he wasn’t skillful enough to get to cut off the ring on Thurman when he started moving.READ  Caleb Plant Las Vegas workout quotes & photos – Plant vs Lee

When Porter did catch up to Thurman, he was wide open for his shots. Thurman would land a clean shot to the head of Porter, and then take off running again. Pacquiao is a lot better at cutting off the ring than Garcia and Porter. More importantly, Pacquiao won’t wait until the second half of the fight to start pressuring Thurman.

Thurman vows to give fans an incredible fight

“I’m ready. This is my time. It’s grind time and it’s show time. I’m planning on giving fans an incredible fight – one to be remembered,” said Thurman.

Thurman says he doesn’t win by moving all night long, but he says he’s prepared to do so in order to get the ‘W’ against Pacquiao.

Other purses for Saturday’s fight card: