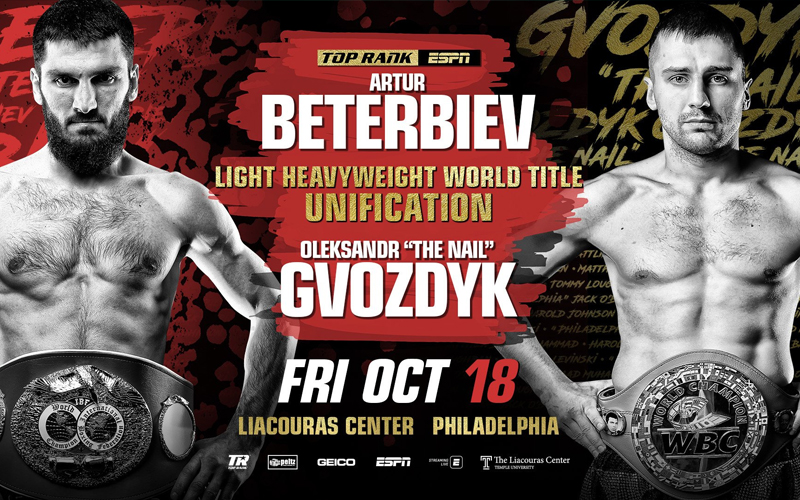 The semi-complete champion of the World Boxing Council, Oleksandr ‘The Nail’ Gvozdyk and also champion Artur Beterbiev, will fight in an expected unification clash on Friday, October 18 at the Liacouras Center in Philadelphia.

The unitary combat Gvozdyk vs. Beterbiev will star in a special edition of Top Rank on ESPN starting at 10 pm ET / 7 pm PT live on ESPN and ESPN Deportes.

“This could be the fight of the year,” said legendary promoter Bob Arum. “These are two undefeated light heavyweight and evenly matched champions. There is nothing better in the sport of boxing. ”

“My first goal was to win a light heavyweight world title. Now, I want to unify the belts, and that mission starts with Artur Beterbiev, ”said Gvozdyk. “This will be a spectacular fight, one that fans will enjoy. Fans asked for this fight. One thing I know is that I will be a unified champion. I have the best coach, Teddy Atlas, in my corner. This is our third fight together, and under your guidance, I will continue to improve. ”

“I want to thank Top Rank and my opponent, Oleksandr Gvozdyk, for making this unification fight possible and giving fans around the world what they want to see,” said Beterbiev. “This will be a great fight between two champions who aspire to become the undisputed world champion of light heavyweight. I really want to get in the ring on October 18. ”