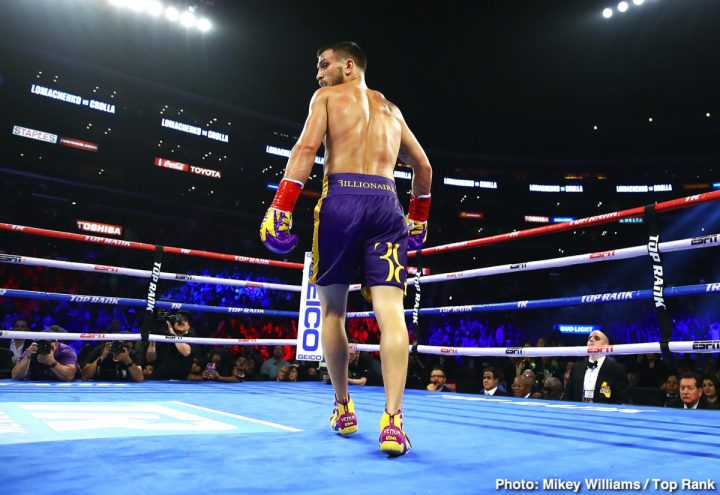 By Doug Berman: Luke Campbell will need to use his punching power and size advantage to defeat Vasiliy Lomachenko on August 31, says trainer Shane McGuigan. The 5’9″ southpaw Campbell (20-2, 16 KOs) isn’t going to beat WBA/WBO lightweight champion Lomachenko (13-1, 10 KOs) by pressuring him the way Orlando Salido did in 2014, says McGuigan.

Luke doesn’t have the physical size going for him that Salido had when he beat Lomachenko by a 12 round split decision. Instead, Campbell will use his punching power and height to win this fight.

2012 Olympic gold medalist Campbell and 2-time gold medal winner Lomachenko will be fighting for the vacant World Boxing Council lightweight title on the 31st of August at the O2 Arena in London, England. The fight will be shown live on Sky Sports Box Office.

McGuigan: Campbell must win with power

“[Campbell] is not going to do what Salido did – march him down and use his weight and size because Luke doesn’t have that weight and size,” said McGuigan to skysports.com in analyzing the Lomachenko-Campbell fight. “Luke is not a come-forward pressure fighter. How do you negate his speed, ability and technical prowess? We have the size advantage, the power advantage. We have to dent him with power, and Luke definitely has the power to dent him. said McGuigan.

It makes perfect sense for Campbell to take advantage of his power and size advantage to punish Lomachenko. Jorge Linares showed that Lomachenko is human after all in their fight in May of 2018. When Lomachenko got careless in round six, Linares caught him with a perfectly timed right hand to put him down on the canvas.READ  Luke Campbell: I will beat Vasiliy Lomachenko

Although some boxing fans said it was a flash knockdown, it looked like Lomachenko was hurt. The shot appeared to black him out for a fraction of a second, causing his legs to crumble underneath him. That wasn’t a case of Lomachenko being off balance. He was hurt from the shot, and that was against a guy with less power than Campbell.

“I can’t get better than Josh Taylor for sparring,” said Campbell to Boxing Social. “He’s big, he’s strong, he throws a lot of punches, and he’s got good foot movement. He’s quick. We know what’s in front of us. I know I’ve got the biggest challenge of my career coming up. It’s definitely been the toughest,” said Campbell about his training camp preparation for Lomachenko fight. “I think you’re going to see the best of me. It’s just another fight, if you take the titles away.

We’re just looking to finish out training camp on a high. I feel like my boxing game has gone up. We’ll see on August 31st. I think it could possibly do it for sure,” said Campbell when asked if a win over Lomachenko would outdo winning a gold medal in the 2012 Olympics. It would be another one that I could take off the list. This is going to be one hell of a fight, and it’s not to be missed. We both bring to the table speed, power, skill and excitement,” said Campbell.

Using IBF light welterweight Josh Taylor for sparring might not help Campbell as much as he thinks, because he’s nothing like Lomachenko. Taylor is a lot bigger, taller and more powerful than Lomachenko. He doesn’t possess the same hand speed, punch output or the boxing skills that Lomachenko possesses. Campbell should be training with short, speedy fighters that throw massive amounts of punches. The one positive that comes from Campbell training with Taylor is he’ll be able to handle Lomachenko’s punches better. But with Lomachenko’s high volume attacks, he’ll wear Campbell down and stop him if he’s able to land a lot of shots.READ  Loma vs Campbell undercard update: Joshua Buatsi takes on Ryan Ford

“I definitely think he should go straight for the rematch,” said Campbellabout Anthony Joshua facing Andy Ruiz Jr. in an immediate rematch on December 7 in Saudi Arabia. “That’s where the money is. Anyone would have done the same thing. It’s a challenge this time. He wants his belts back, and he’s felt the pain of losing, and he won’t want to feel that again. So I’m sure he’ll give everything and leave no stone upturned,” said Campbell about Joshua.