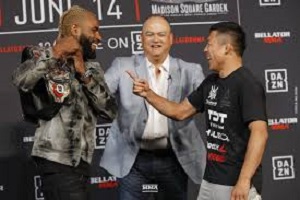 Darrion Caldwell has more than revenge on his mind.

It would be understandable if Caldwell were solely focused on defeating Kyoji Horiguchi at Bellator 222. With a win, “The Wolf” would avenge his most recent loss, claim a victory over the Rizin Fighting Federation bantamweight champion, and log the second defense of his own 135-pound Bellator belt.

But given how long it’s taken Caldwell to get to the top, he’s eager to make the most of his time while there, and that means acknowledging that his business with Horiguchi might extend beyond this week even if Caldwell has his hand raised on Friday.

After all, given how their first meeting ended, a submission win for Horiguchi, Caldwell wants to prove definitively that he is the better fighter and if means having to go up 2-1 on Horiguchi at some point, then so be it. Caldwell’s only other loss was an upset at the hands of Joe Taimanglo, also by submission, and even though Caldwell won their rematch handily, he points to that lesser known series as an example of how he will go to great lengths to erase any doubt that he is superior to everyone he’s faced so far.

“Absolutely. We’ve got to square our differences,” Caldwell recently told MMA Fighting when asked about a possible trilogy with Horiguchi. “Even Joe, he couldn’t beat Leandro Higo, I think he barely squeaked by Joe Warren, I don’t know who won that fight, but I would want to fight him and make sure that there is no question, even though there is no question. I just want to make sure that everybody gets the picture.

“So yeah, [Kyoji and I] are going to fight three times.”

Then there was the matter of the fight being in a ring as opposed to the cage that Caldwell has had so much success in since signing with Bellator five years ago. He doesn’t want to blame the change in combat environs on the fateful finish, but he admits that there were scenarios unique to the squared circle that he wasn’t prepared for.

“There was definitely some situations where I was like, ‘Oh shit,’” Caldwell said. “But a fight is a fight, you know? I was winning the first two rounds, had a mental lapse, lost my focus, he took his hooks, put it on my back, I put my head in his ribs, and [the choke] was right there.”

Though Bellator and Rizin officials had a handshake agreement for Horiguchi and Caldwell to face off again after their first meeting regardless of the outcome, Caldwell will tell you he was open to defending his title against other worthy Bellator contenders, naming Eduardo Dantas (who Caldwell defeated for the bantamweight title back at Bellator 184) and Juan Archuleta (who is currently unbeaten in four Bellator appearances and could punch his ticket to a championship bout with a win over Dantas on Friday) as candidates.

He also feels an even stronger urge to fight Patricio “Pitbull” Freire. The two have been involved in a verbal back-and-forth for some time now, though Freire has recently been occupied with a Michael Chandler feud.

Freire beat Chandler at Bellator 221 for the lightweight title and he is currently the champion at 145 and 155 pounds. It’s not out of the question that “Pitbull” could attempt to make the move down to 135 pounds for a third belt, but Caldwell isn’t hearing that.

If he fights Freire, he wants to be the one in position to add gold to his collection.

“His belt is all that matters,” Caldwell said. “It’s gonna happen. My belt is secure, my belt is not going anywhere. His belt though, it’s obtainable.”