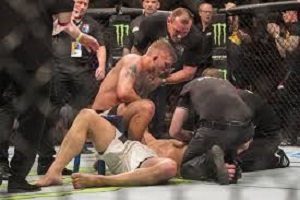 Sport-related concussion is a clear and present danger in all sports that feature direct and incidental blows to the head. Additionally — because concussion is caused by the rotation of the brain inside the skull — blows to other parts of the body, which elicit a ‘whiplash’ effect on the head and neck can also result in symptoms of concussion.

Concussion symptoms typically include prolonged bouts of light sensitivity, headaches, dizziness, changes in mood, memory loss, sleep disturbance, inability to walk straight, and a decreased ability to focus. In some cases — including those involving professional MMA fighters — these symptoms last for years.

At the University of Saskatchewan (USask) a team of scientists has been studying a new method designed to reverse the symptoms of concussion. That method involves magnets.

According to Science Daily(which quotes a newly published paper in the Journal of Neurotrauma) the USask team used concussed rodents to see if a laptop-style device that emitted magnetic stimulation could reduce the symptoms of the animals’ concussions.

To do this, they subjected the rodents to 20 minutes of Low Frequency Magnetic Stimulation per day. The magnetic stimulation was designed to mimic the way brain waves oscillate.

After treating the rodents with this stimulation, scientists had the animals attempt a number of tasks. The study showed that, after the stimulation, previously concussed rodents were better at walking in straight lines, navigating a maze, running on a wheel and performing cognitive tests.

Rodents that did not receive magnetic stimulation were unable to perform tasks like running on a wheel without falling off.

In addition to seemingly curing rodents of concussion symptoms, USask scientists also observed that certain proteins, which prevent post-concussion inflammation and neurodegeneration, were restored during the tests.

The study’s scientists believe this is evidence that Low Frequency Magnetic Stimulation can potentially protect brains from degeneration. The USask team stated that their next steps are longer-term tests on rodents, followed by human trials.

USask’s most recent magnetic stimulation experiments were funded by Canada’s Department of Defence, the Saskatchewan Health Research Foundation, and the college of Medicine ComRAD fund.