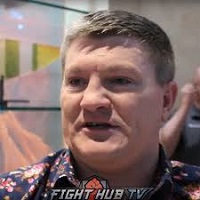 Ricky Hatton on what he thought of Joshua-Ruiz:

“I think Anthony Joshua took his eye off the ball, didn’t he? Just took his eye off the ball. You know, that Ruiz is a lot more dangerous when he’s hurt. I think when he knocked him down he should’ve gotten back on the jab, thought ‘this lil’ fella needs softening up a little bit more before he’s ready for the taking.’ But he didn’t, he went straight in there to finish him off straight away…Someone like Ruiz, he’s more dangerous when he’s hurting, and he should’ve really know that but I think it was seen as just a routine title defense again.

“You know, I think when he knocked him down he just switched of that little bit. Tyson’s got to do similar, in many ways. He’s got to be focused from start to finish.”

On what he thinks happens in a rematch:

“I think [Joshua] needs to get in there straight away, you know what I mean? But it’s not for me to say because if I’m hearing rumors, there’s a lot going on behind the scenes and maybe if there’s stuff going on behind the scenes the worst thing will be to fight him straight away. But if he’s in a happy household, I’d get back on that horse straight away…it’s just a technical mistake which cost him the fight. If he fights Ruiz, no disrespect, ten times, he beats him nine times for me. All day. He just took his eye of the ball a bit.”