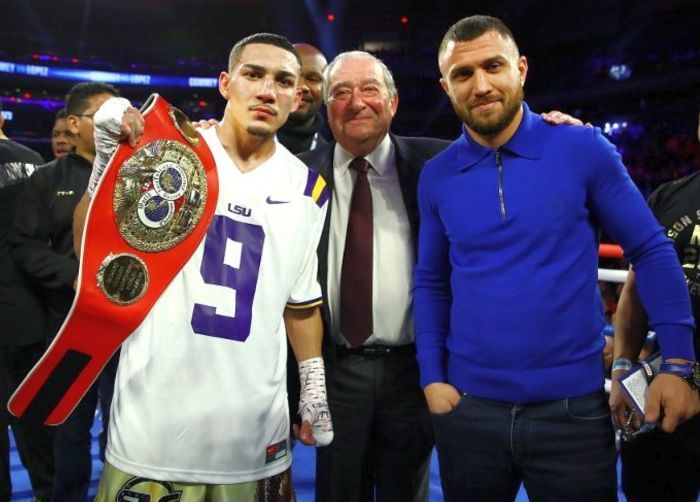 Boxing fans wonder about 🇺🇦 Vasiliy Lomachenko’s next opponent, whom is not yet known. Loma’s promoter, Bob Arum, has said that he’d love Lomachenko vs Gervonta Davis (23-0-, 22 KO’s) next.

But Gervonta’s handler, Floyd “Money” Mayweather Jr., does not seem that much interested, so far. Of course — as in everything with Floyd — things could change. In the meantime, fans wonder how about the WBA/WBO Lightweight king Loma unifying against unbeaten IBF 135 pound world titlist Honduran-American Teofimo Lopez?

In fact, a lot of fans in the world of boxing would prefer Loma vs Teofimo Lopez (15-0, 12 KO’s) next. It would be an awesome natural fight that no fan would want to miss, as well as one of the highlight fights for the 2020 boxing year. Would that happen next?

If not, then there’s a third option: unified WBA/WBO king Lomachenko (14-1, 10 KO’s) vs WBC lightweight champion Devin Haney (24-0, 15 KO’s). Sounds good too? Or not? In fact, this one, Lomachenko, vs Haney, is the one that Matchroom Boxing’s Eddie Hearn has in his promoter’s mind.

Hearn feels that Haney is ready to get in the ring with Vasiliy Lomachenko, and that the fight would grab attention. That much so that he would love to promote it with Arum. The old fox disagrees. Indeed, the Hall-of-Famer Top Rank boss does not see Lomachenko vs Haney being neither a blockbuster, nor a competitive fight.

So who will be Loma’s next dancing partner, that’s what we wonder.

Nothing has yet been decided, with all cards on the table. Your guess being as good as mine, though whoever his next opponent is, all eyeballs will be again on the superbly skilled Lomachenko, one of the very top attractions in our sport of boxing today. 🔥🔥

The author Carlos Costa of Panama is a veteran boxing reporter living in Asia since 1991. Carlos can be reached at carlos512@hotmail.com and whatsapp +639184538152.