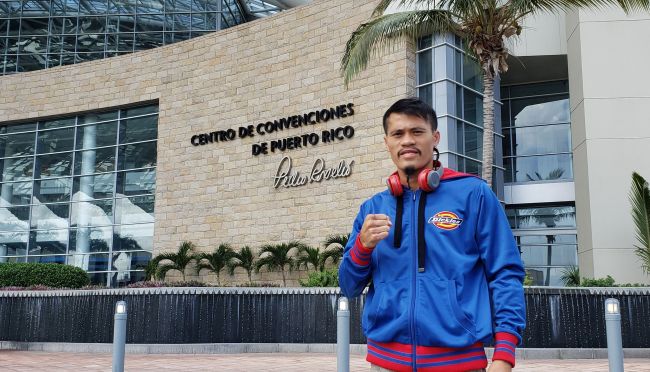 The Filipino and his team have flown to the “Island of Enchantment” for his important world title defense against Puerto Rican WBO # 1 ranked challenger Wilfredo “Bimbito” Méndez in the main event of “Casino Metro Boxing Nights” this Saturday, August 24.

“We come to Puerto Rico to make a good fight.    We are well-prepared after a long training camp to keep my title,” assured Saludar upon arrival.

Far more accomplished and experienced fighter, Saludar is favorite to retain his belt this Saturday, though Wilfredo “Bimbito” Méndez wants to rock and shock the Pinoy.    Will the young Boricua be able to do it?

Who will emerge victorious?


The final presser for the event will be held at the District Bar located in the lobby of the Sheraton Puerto Rico Hotel & Casino, starting at 12 noon.

Tickets for the exciting show can be purchase online at www.ticketerapr.com.

The author Carlos Costa is a Panama boxing reporter living permanent in the Philippines.   Carlos can be reached at carlos512@hotmail.com and whatsapp +639184538152.