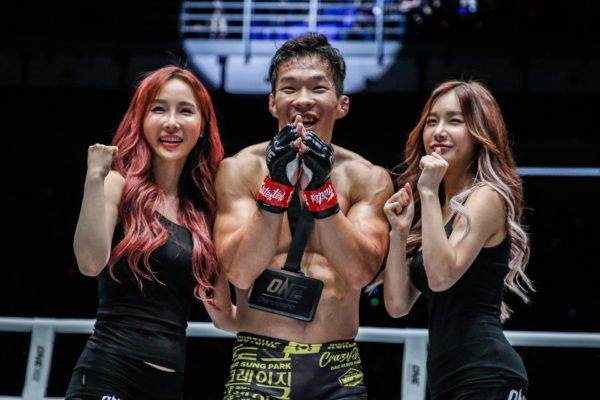 “Crazy Dog” Dae Sung Park returned from the wilderness to deliver one of the most blistering performances at ONE: MASTERS OF DESTINY.

The South Korean faced off against old rival, Kimihiro Eto, in a lightweight battle last Friday, 12 July in Kuala Lumpur, Malaysia, and just like the last time, the South Korean won via spectacular knockout.

His victory was made even sweeter because he had to wait almost a year to compete again due to health issues.

“I was simply thrilled to be able to compete again after a one-year break, and it was twice as thrilling to win,” Park says.

When the pair originally clashed on the first ONE Warrior Series (OWS) live event last March, Park defeated his Japanese foe via TKO at the 1:41 mark of round one.

History repeated itself at the Axiata Arena, but it took the 25-year-old an extra round this time to achieve the same result. For the first five minutes, Eto held his own, and that is exactly what “Crazy Dog” expected.

“My opponent had been defeated with a knockout by me before, so I was expecting the match to last all three rounds,” he says.

Everything changed in the second stanza after Park noticed the success he was having with some of his offense – including a flying roundhouse kick.

“We are fairly equal when it comes to wrestling, so I relied a lot on my striking skills,” Park says.

“I used a lot of taekwondo-style high kicks and started to notice my opponent feeling the pinch. After I felt him being pressured, I went all out with my striking attacks.”

The beginning of the end came when Park landed a head kick to drop his Japanese opponent, and then swarmed with punches to send him to the canvas again.

However, somehow, Eto – who also became an OWS contract winner in February thanks to three consecutive stoppage wins – managed to survive and clinch up with the Team Macho representative to stay alive in the contest. That came as a surprise to “Crazy Dog,” but he was impressed by his will to survive.

“I knocked him down about three times, but I could really feel how much he wanted to win,” he says.

As soon as the athletes were separated, Park pressed forward again, knocked down Eto once more, and finally sealed the win by raining down hammer fists from top position.

That win – Park’s second on the global stage for martial arts – has set him up for a quick turnaround.

Although he says he suffered some minor injuries during his bout with Eto, nothing was going to stop him from competing again, and he did not hesitate to accept a contest with Honorio “The Rock” Banario at ONE: DAWN OF HEROES on 2 August in Manila, Philippines.

“I’m just thrilled to be able to be given an opportunity to keep competing after a long break,” the Team Macho man adds.

“You have no idea how much I’ve been wanting to compete.”