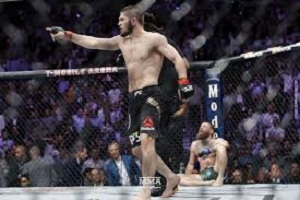 “The Eagle” claimed a fourth-round victory over McGregor in their highly anticipated clash in Las Vegas last October in the main event of UFC 229.

According to Mendez, despite Dana White’s claims that the rematch should happen in 2019, he still doesn’t know who Nurmagomedov wants to face in his next bout.

“Khabib may very well have one idea, and I’ll have something else, which is usually the case, but the person with the best thoughts on what Khabib’s going to do is his father,” Mendes told Off The Brawl.

“Nobody else has that closeness to him. After his father it’s me or Ali [Abdelaziz], or me and Ali. But as far as what he wants to do, it’s going to come down to basically what Khabib wants. It might not matter what the UFC wants with the Conor and Khabib rematch.”

Mendez went on to claim that he doesn’t think that the rematch is the right way to go in terms of sport, but underlined that McGregor is the biggest “prizefight” due to the amount of money Nurmagomedov can makes from fighting him.

“That’s the biggest money fight in MMA bar none,” he added. “There is nobody in MMA that can bring that kind of money that Khabib and Conor can in the rematch. That’s the reason I would want that, but Khabib may want a different thing, Khabib may want Tony [Ferguson]. It’s hard to say because Jan. 29th hasn’t happened. We don’t know what [NAC] are going to do, how long they’ll be suspended, how much money…but from my point of view I would want the rematch for the prizefight. It’s bigger, it’s three or four times as much.”

White has been tossing the idea of stadium show around for many years and Mendez thinks there is no better marque that the Nurmagomedov vs. McGregor rematch that could justify an event of that scale.

“Now’s the time, to be honest with you,” Mendes replied when asked if a rematch between Nurmagomedov and McGregor is the kind of marquee that would justify a stadium show.

“We don’t know with Conor, he’s so rich with his Proper 12. I hear it’s doing fantastic. He’s got a great image, bro. He appears to be a helluva businessman. Now’s the time to strike while the iron is hot, I say Cowboys Stadium. That would do the pay-per-view numbers; that would do everything. I think now is the time to consider doing something like that. It would be the right place for a stadium show. Vegas would be the right place if they built the Raiders stadium in time, but that won’t be built in time.”