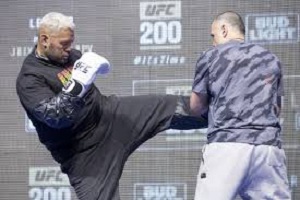 Whether it be in boxing, kickboxing, or MMA, Mark Hunt has been fighting professionally for 20 years, and in those two decades he has built a legacy as one of the better combat sports athletes ever. He’s a legend of the game, often listed among your favorite fighter’s favorite fighters, because of his willingness “to play punch face” with anyone at any time. But even a man as devoutly in love with fighting as Hunt has his breaking point, and it turns out the UFC was just that for “The Super Samoan”.

For the last few years, Hunt has been embroiled in a lawsuit with the UFC over their promotion of fighters caught using performance enhancing drugs. An outspoken opponent of steroid usage in MMA, Hunt has been highly critical of the UFC’s relationship with USADA and the seemingly inconsistent way the program is applied to fighters who are big financial draws. It’s something the former K-1 Grand Prix champion says soured his love of the game.

“They’ve actually taken my love for fighting away because of how they promote steroids and cheaters, how they’ve done it all,” Hunt told MMA UK recently. “They’ve pushed me out of the way, to be honest and that’s what’s taken my love for fighting away. It’s kind of sad because they should be promoting the guy that’s not cheating whereas they are promoting the cheaters of this sport, which is wrong. I actually thought Jeff Novitzky was a nice person but he’s just a sellout. You’re a sellout, bro. That’s the bottom line.”

Novitzky made his name as a the guy who brought down Lance Armstrong for doping in the Tour de France. In 2015, he joined the UFC as Vice President of Athlete Health and Performance. His job is to head up the anti-doping efforts in the UFC but Hunt says he has done little more than run interference for high profile athletes who get caught cheating in the organization; case in point, the company’s decision to move UFC 232 to California on a week’s notice because Nevada wouldn’t license Jon Jones over the continued presence of PED metabolites in his system. Novitsky addressed the entire fiasco, saying that the UFC was keeping Jones on the card because the metabolites showing up were “remnants” of his previous test failures and would not provide any performance enhancing benefit. But Hunt is calling shenanigans.

“Pure example, look at the situation with Jon Jones and [Alexander] Gustafsson,” Hunt said. “Look at that situation. They move a whole freakin’ show for one cheating guy. All the fans miss out on all their airlines, all their flights, all that jazz. They miss out all because of this one idiot. . .

“The UFC has the best stringent testing in the whole freakin’ world but look what they’re doing. They give people four-month waivers so they can get past the tests, they’ve got these guys that say ‘The tests say has a picogram – a bit of steroids in him – but that’s from the last time we caught him.’ But he’s still got some sh*t in him. So does that mean he’s cheating? Yes, he is. Why are you even putting him to fight? The truth of the fact is, it didn’t matter whether he had a picogram now or if he had it 20 years ago, he’s still got some sh*t in him so he shouldn’t be fighting. It’s illegal. They’re promoting steroids, that’s what they’re doing.”

And Hunt argues that his issues with USADA and the UFC didn’t just take sour him on fighting, it also cost him performance-wise. Hunt, whose contract with the UFC finished in December, lost all three of his fights last year, and looked dreadful in each of them. The reason for that, he says, is that it’s hard to be mentally focused on fighting when you hate the people you work for.

“I still want to be the world champion in MMA,” Hunt said. “I know I’m 44 but still it’s one of my dreams. It’s been put off for a little because of this stupid company. The moment I realized I was never gonna get a title shot, that’s the time I started losing. Since the Derrick Lewis fight, every fight after that has been not good at all. I actually went to see a sport [psychologist] about it and he hit it on the head straightaway when I talked to him: it’s hard to work for a company that’s cheated you and a lot of other fighters.”

Hunt is now a free agent and says he is currently fielding offers from a number of promotions, trying to find the best fit for him going forward because ‘The Super Samoan’ is far from finished. Even at 44, Hunt says he still has a couple of years left in him and wants to prove that his lackluster exit from the UFC was due to his issues with the company and not his skills.

“I want to fight five more times. I want to see if it’s time to retire or if working for the UFC just made me go sour. At the end of the day, it’s either-or. I still feel like I’m a lot better than a lot of those guys.”