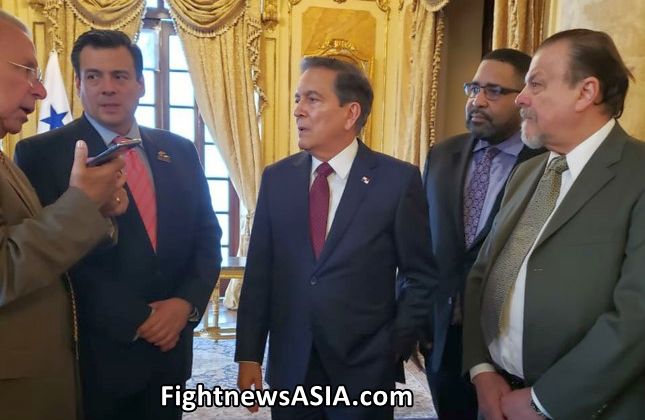 During the meeting, Sampson Lewkowicz talk to the President of Panama about details of the successful amateur boxing program that he has been developing in Uruguay.

The fruitful exchange of ideas — which was held at the Palacio de las Garzas, in Panama City — counted with important points stressed by Mexican Mauricio Sulaiman, while the president of the IBF American Daryl Peoples commented on various issues related to the present and future of boxing.

Also in attendance during the friendly gathering was legendary Panama boxing journalist Juan Carlos Tapia, whose TV boxing show “Lo Mejor del Boxeo” (The Best of Boxing) has been uninterrupted on air for last 45 years in Panama. The feat of durability got his boxing show included in the Guinness Book of World Records as the longest running sports TV broadcast in the world.

In response, the President of Panama Mr. Laurentino Cortizo looked enthusiastic, showing interest in trying it in Panama.

The Panamanian president said “it could empower the young and give bright light in the noble sport of boxing.”