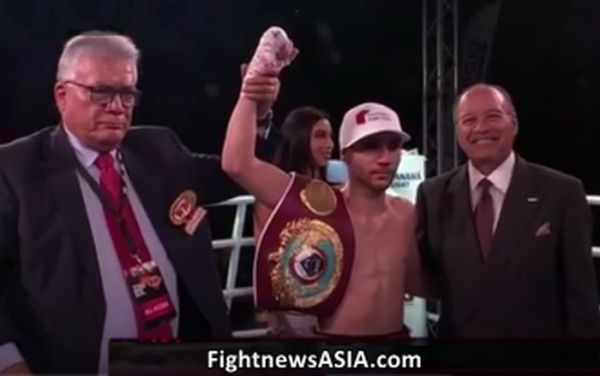 Faster and more crafty, the 23-year-old “Bimbito” Mendez (16-1, 6 KO’s) made perfect use of his superior boxing skills to outclass the rather disorganized, head-first Mendoza (30-7-2, 23 KO’s), who lacked weapons of quality to counter the accurate display of good boxing delivered by the younger, more talented Puerto Rican fighter, Puerto Rico’s one and only current male boxing world champion today.

The speedster southpaw Mendez  —  who prior to the stoppage was clearly outclassing Mendoza in every single round   —   shared during Panama’s COS TV post-fight interview that his next WBO world title defense will be against Chinese WBO International Minimumweight # 1 mandatory challenger Jing Xiang (17-4-2, 3 KO’s).

The Mendez vs Xiang rumble was being planned  to take place in China.   However, due to the Wuhan Coronavirus situation, the prospect of Wilfredo Mendez traveling to China for a title defense there is now off the table.

So the 105 lbs mandatory defense against Jiang Xiang might take place in Puerto Rico, Panama or somewhere else.
Filipino 105-pound fighters in the WBO world-rankings are:

The author Carlos Costa of Panama is a veteran boxing reporter living in the Philippines.   Carlos can be reached at carlos512@hotmail.com and whatsapp +639184538152.