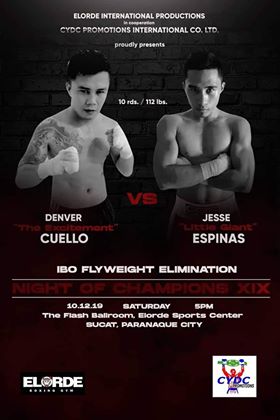 Cuelo to face Espinas in an eliminator on Oct. 12

The winner will challenge current IBO world champion Maximino Flores, who recently beat Carlo Caesar Penalosa of the Philippines by a 7th round technical decision last Aug. 25 in Quezon City.

The 32-year old Cuelo recently retired Detnarong Omkrathok of Thailand in the 2nd round to retain the ABF bantamweight title last Aug. 3 in Mandaluyong City.

But he lost to Edward Heno of Paranaque City for the OPBF light flyweight title last Aug. 11 in Laguna.