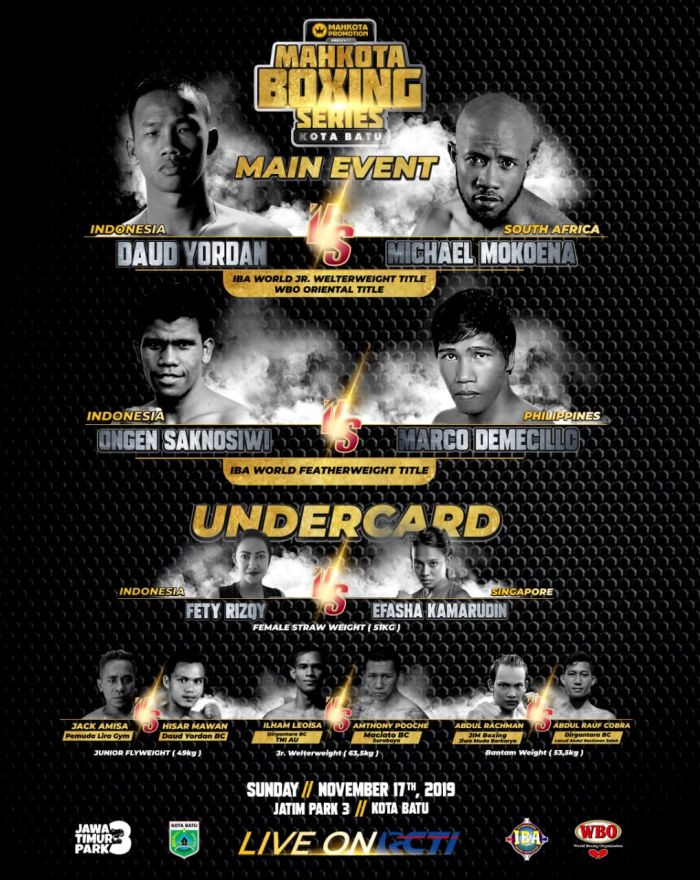 The battle, which might not make distance, is also valid for the vacant WBO Oriental strap.

Will “Cino” Yourdan became a three-division titlist?   Or will the South African former Gauteng Junior Welterweight champ be the one to emerge victorious?

Will the more experienced Demecillo, who hails from a large boxing family, be able to control with superior boxing skills and ring smarts the furious knockout-seeking attacks from the Hawk Saknosowi, the younger Indonesian warrior in aiming at scoring his eight knockout win in a row?

“This 2019 Mahkota Promotions doing some good start for our campaign to the next level of boxing promotions in the International stage. We do hope this fight can presents the best fight for the pride of our nations.” ~ Raja Sapta Oktohari, Chairman of Mahkota Promotions as well as Chairman of Indonesian Olympic Committee 2019-2023. ~

“This is an exciting fight for me, Moekoena is a good boxer. Will do my best to become the first 3 Weight Division World Champion, for my country.” ~ Daud Cino Yordan ~

“It is the biggest opportunity on my life. To become World Champion is my dream. Hope I can give the best to my country, family and the Air Force team.” ~ Ongen “Hawk” Saknosiwi ~

The IBA world title double-header is a production of Indonesia promoters Raja Sapta Oktohari, Gustiantira Alandy and “The Al Haymon of Asia” Urgyen Rinchen Sim of Mahkota Promotions in association with Alexander Shah of Evolution Boxing, the City of Batu and Jawa Timur Park.

The show will be televised in Indonesia on RCTI (Rajawali Citra Televisi Indonesia).

The author Carlos Costa is a boxing reporter based in the Philippines.   Carlos can be reached at carlos512@hotmail.com and whatsapp +639184538152.