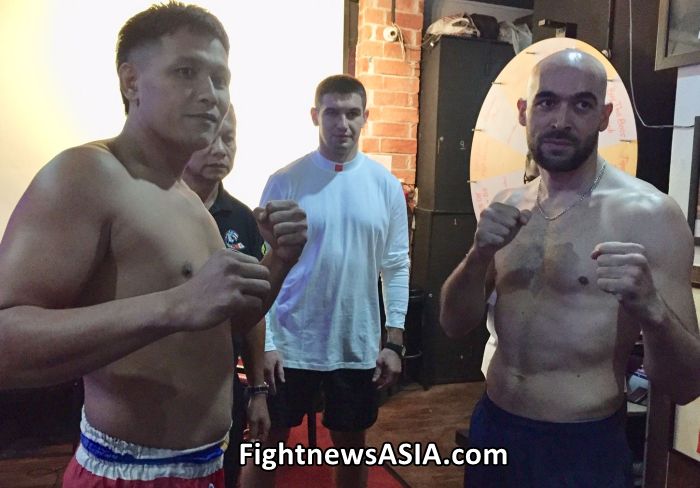 PATTAYA, Thailand   —   Boxers have just made weight, setting the stage hot and ready for EVOLUTION FIGHT 3 seven-bout fighting action tomorrow Saturday, September 21st, at the much fun Bone Night Club here in the exciting City of Pattaya in Chonburi, Kingdom of Thailand.

In the co-feature, experienced Thai gladiator Yuttana Wongda (14-24, 10 KO’s) is set to engage in combat French fighter Mathieu Petitjean, 33, of Cannes, the famed resort town on the French Riviera.       Their skirmish is in the light heavyweight division.

In another international fight, big Indian cruiserweight “The India Tyson” Santosh Kumar of the City of Mumbai said to be ready to take on unbeaten local Thai combatant Karin Khongmueang (4-0, 3 KO’s).   Their war is a four frame saga that might not make the distance.

Also, Briton-Spaniard Raffaele Fleming makes his pro boxing debut by locking horns against fearless former muay thai combatant Phattharaphon Somchit.    Their 4-round battle is in the welterweight division.     Who will win the intense heat, the Briton or the Thai?

Finally, unbeaten 23-year-old Kevin Gronlund of Norway made 63 kilos (139 pounds) for his private war against experienced Thai Surachet Tongmala.    Their fight is a 4-frame duel destined to ignite fireworks.

The boxing show tomorrow Saturday, September 21, at the Bone Night Club in Pattaya, Thailand, is the newest fighting production of EVOLUTION.

The author Carlos Costa is a Panama veteran boxing reporter living in the Philippines.   Carlos can be reached at carlos512@hotmail.com and whatsapp/viber: +639184538152.