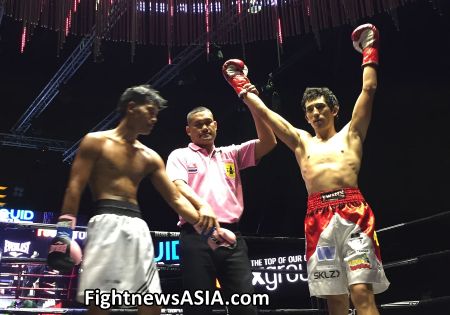 PATTAYA, Thailand   —   An entertaining festival of knockouts thrilled fight fans in attendance during the Evolution Fight Series 3.0 installment that unfolded at the Bone Night Club here in the fun City of Pattaya in Southern Thailand.

In the main event, Russian super lightweight Musheg Adoian vaporized brave Thai warrior Rattakorn Tassaworn, dropping him twice, punishing him with huge bombs from the getgo, dismantling the younger combatant at the 1:38 mark in frame one.   The fast win readies the Armenian-born Musheg, 24, to more challenging battles.

The co-feature was equally thunderous with hard-punching Uzbekistan lightweight Murodjon Yokubov (5-0, 4 KO’s) obliterating Thai Tanawat Ketsiri during the explosive exchanges of chapter one.   Time was 1:19.

Tolegen, 24, started awesomely good, effectively stalking and landing hard on the retrieving Mcdonnell, clearly winning the opening round, but lost steam, allowing the taller Aussie to use her superior boxing skills and reach to dictate the tempo for the remaining of the contest.   At the end, scorecards were unanimous in favor of Mcdonnell, a warrior lady who trains here in Pattaya.

Fan-friendly Spaniard-Scottish welterweight Raffaele Fleming scored his first win in pro boxing by overpowering big-heart Thai boxer Phattharaphon Somchit during the tough exchanges of stanza two.   In that frame, Raffaele, 24, made effective use of his speed and superior fire power to rock and stop the younger Thai combatant rocking him down to the blue Evolution canvas in brutal fashion.   Time was 1:18 in round two.

In cruiserweights, the aggressive “Indian Tyson” Santosh Kumar, 22, of Mumbai wasted no time in ravaging Kanitsorn Siwangnok for a devastating 18-second knockout win.   Way superior was Santosh over the Thai, propeling him fast to dreamland.

The confident, more aggressive Yuttana, 31, began dominating skirmishes early on in the battle, pushing the fight forward, sometimes mocking the back-pedaling Frenchman, but quickly began losing gas as the faster Mathieu kept on boxing from a distance, landing jabs and combos, especially during the cross fires in round three, till a sharp non-intentional elbow opened a cut on the skull of the man from France.

As red liquid began dripping out of his head, Mathieu just freaked out, refusing to go on.   The thrilling war was quickly ruled a no contest with a rematch likely to unfold later on this year, according to fight promoter Alexander Shah.


Moreover, Norwegian-Thai super lightweight Kevin Gronlund (2-0, 1 KO) scored a round two TKO win over more experienced Thai Surachet Tongmala, dismantling him in less than six minutes of battle.   Owner of a fast and effective left hand, the 23-year-old Kevin looked in total control while displaying good boxing skills and power.   Training here in Pattaya, the soft-spoken, hard-puncher is a fighter to watch for the coming installments of Evolution Fight Series.

Evolution Fight Series 3 was a production of promoters Joshua David Peatfield of the UK and Alexander Shah of Singapore in association with Everlast Thailand, Liquid Group, Club Quarters, Moulin Rouge Thailand, the Bone Club and the Retox Group.

Matchmaker and co-promoter was Nazar Moroz of Ukraine.

.
The author Carlos Costa is a Panama veteran boxing reporter living in the Philippines.   Carlos can be reached at carlos512@hotmail.com and whatsapp +639184538152.