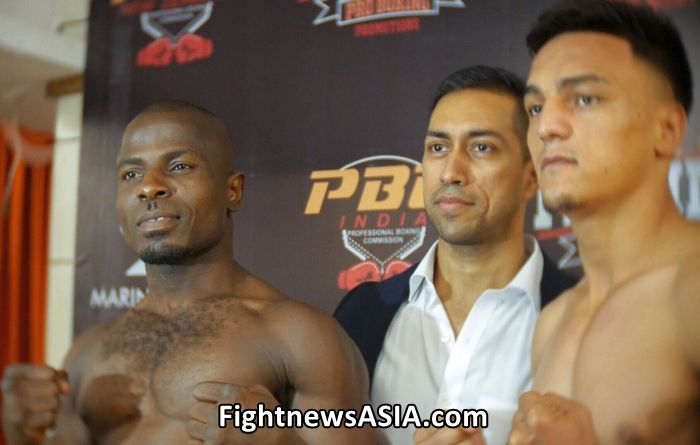 India continues its exciting path into pro boxing, staging its latest fight card in Mumbai, the historic, awesome capital city of the State of Maharashtra, and the result was a total, thrilling success.

Dashing, risk-taker Devraj Das — a leading promoter in the land of Mahatma Gandi — outdid himself again, producing its eight boxing event this year.    Not a bad performance by any measurement.

But Devraj Das wants even more.

His company Marine Pro Boxing Promotion aims at steaming forward with even more boxing shows, all sanctioned by Professional Boxing Commission of India.

The latest rumble has just unfolded, a nine pro bouts event that did not fail to entertain India boxing fans, craving for real fight action.

It was a competitive blow-by-blow battle with both fighters at each other in the center of the ring trading hard with Zamani edging a well-deserved victory.  The third man in the ring was Archit Shivdas.

The duel came to an end when the retrieving Aman refused to continue battling for the action of second chapter.   The result was a round two TKO win for Vimal Punera, a 112-pounder warrior ready for tougher challenges.

In the second bout of the evening welterweight 22-year-old Neeraj (2-1, 2 KO’s) of Chandawali blasted out young pro boxing debutant Lucky Sourav, 16, for a frame one TKO victory.

Plus, super welterweight Pardeep Kharera, 23, of Rewari in the Indian state of Haryana vaporized rookie Mohit to press his boxing career forward.

Judge Umesh Rajak’s scorecard was 39-37 for for the 30 year-old Vedant, overruled by judges Jayesh Chougale and Sangeeta Pawase who saw the four-rounder an even 38-38.

Its unclear if there will be a rematch, or whether the boxers want to move forward with new opponents.

.
The author Carlos Costa is a Panama boxing reporter living in the Philippines.   Carlos can be reached at carlos512@hotmail.com and whatsapp/viber +639184538152.